It felt strange the day after Christmas not to have to bake anything, and with the abundance of cookies wrapped in tins that we now have, I may not have to think about sweets for a while.

Christmas was a day of a lot of driving. My husband was tired from working the all night Christmas Eve-into-Christmas morning shift at the hospital, and so the driving from our house, to the in-laws, to my mother's, and back home again was performed by me. The day after Christmas I refused to get back into a car for any reason. Still, it was an enjoyable day of shared meals and visiting.

I was gifted with the elusive black walnut cracker that we forgot to pick up in Ohio. Watch out walnuts, here we come! The gift to myself was finally catching that mouse that had been wreaking havoc in the kitchen every night, causing me endless amounts of cleaning each day. Having ignored the traps with peanut butter, I finally baited them with bread crumbs which worked instantly. It was so unbelievable to finally catch this thing that my husband asked if I had just managed to grab it with my bare hands and shove it in the trap. That option seemed more likely than catching it in a trap! Unfortunately, I only had one day of rest and then another mouse moved into the former mouse's territory. Back to the drawing board.

We decorate mostly with Christmas cards (because when your house is in renovation mode, decorating of any sort is a non-issue) and among the more memorable cards we received this year was one from my great-aunt Margaret who sent us some pictures of her pet fox. 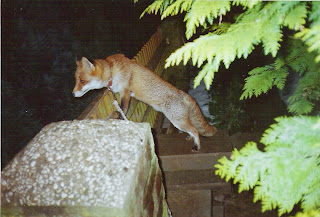 Pertzel the fox is six years old, and was raised by my aunt and uncle as an orphaned pup. My uncle is really the only one who can touch him- he even gives Pertzel vaccines that he buys from the veterinarian. My aunt says that the fox brings them a lot of joy, but they can't ever go on a vacation. Indeed, who is going to come by and feed the fox? Surely no kennel would board him! Just so you know, I wouldn't try this at home, and don't at all recommend keeping wild animals as pets. Their fox ownership came about through unique circumstances, not to mention an apparent lack of wildlife laws where my aunt and uncle live.

Today I want to get out to the market and restock. Maybe there are still some good deals left, too. We'll see...

In the Kitchen: Restocking mostly. The cupboards aren't bare, but the refrigerator nearly is. Today I want to get out to the market and see if there are any good deals left.

On the Table: Yesterday was just leftovers and sandwiches. Cookies, leftover trifle, and a bowl of popcorn for a snack. Today I'd like to do some baked fish with ginger broccoli and rice. I'll see what's fresh at the market as far as fish.

Around the House: Did I tell you what happened with the wood stove? This important part called a "baffle" was slightly damaged (by accident) while the stove was being set into place. My husband called about a new one and they said they could send us one in twelve weeks or something ridiculous. Just awful. All that work putting it in, and our wood pile is healthy and ready to go, and now we have to wait for this part.

On the Nightstand: Emma: A Widow Among the Amish, by Ervin R. Stutzman. A true story.
Posted by Monica at 9:49 AM