It started on Saturday morning when the phone rang very, very early. Still in bed, I did not answer it, but soon felt a little sorry that I hadn't when my husband was late coming home from work. When he did arrive home, he explained that he had accidentally grabbed a co-worker's lunch on his way out of work (thinking the bag contained some unwanted fruit he was bringing home) and didn't discover it until he was miles away from the hospital where he works. So, had to turn around to bring the lunch back. That early morning phone call was from an anxious coworker wanting her lunch.

Then, the water problems started.
"There wasn't enough hot water for a shower, what appliance are you running out here?"
"I'm not running any hot-water appliance." I was making pistachio bread for breakfast.
"Dishwasher?"
"Nope."
"Washing machine?"
"Cold water."

That was when we discovered that we no longer had hot water. The timing was awful, at best, as the Mister needed to get ready for an annual winter camping trip that he does with some friends he grew up with in youth group. There were still preparations for that to be made, and now he would have to squeeze in time to investigate the water heater, as well. By mid-afternoon it was theorized that one of the thermostats on the hot water heater had gone bad, and that was easily replaced since for some reason we had an extra one lying around. But even the new thermostat did not seem to fix things and by now it was getting late. My husband had missed his chance to ride with his friends out to the campsite, which this year was located on an island off of a remote marshy area. So now I would have to drop off the Mister in some remote swamp, and come back to a house with no hot water. I was too exhausted at the prospect to even complain about it.

And so I drove my husband down a terribly bumpy dirt road (just on the edge of no man's land) wondering along the way how I would ever find my way back home before dark. The road leading out to the marsh had puddles the size of small lakes and bumps that rivaled Appalachia. At some point, the Mister, wearing rubber hip-waders and carrying an enormous backpack, motioned for me to stop the car. He disembarked for his adventure after we worked out whether or not I should beep the horn after I have safely made it to the main road, or only if the vehicle got stuck in one of the mini-lakes.

Then, I returned home to find that not only did we have hot water, but we had instant boiling water coming out of the faucet. In fact, we only had boiling hot water or cold, but nothing in between. Well, that was better than not having hot water at all.

The next morning at church I did my yearly explaining of the winter camping trip tradition in my husband's absence, and when asked by someone how everything else was going, mentioned the broken water heater and my hopes for having it fixed. The person who asked immediately negated my concern by telling me that at least it was "a nice warm day outside" which I can only suppose they think cancels out any side effects of not being able to bathe comfortably.

It turned out that it was the thermostat in the water heater, and once my husband set it correctly, all was well. But the whole weekend had passed and I still had not found time to get a picture of me taken in an apron that my dear friend Amy made for me. Amy makes the cutest little aprons from the backs of jeans that she gets at the Goodwill, and I was so excited when she sent me one with hot pink polka dots that she felt matched my personality.
"Don't you think they match my personality?" I asked the Mister, with tongue planted firmly in cheek.
He looked like a deer in lights. It does not match how my husband sees me at all. But he managed to squeak out a "yes" anyway.

It's a great apron, Amy. Thank you! 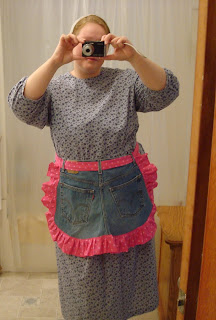