Our Day at the Philadelphia Flower Show with Pictures

So this past weekend, my mother and I went to the Philadelphia Flower Show. She had this great deal on tickets and we had only ever gone once before. It's the largest flower show on the East coast. It's good to go into Philadelphia a couple times a year to remind myself of why I never go there. It's dirty for one, you feel like you need a shower upon immediately returning home. It's also crowded as crazy, and there's no place to park if you want to drive there yourself. I was surprised to find the bridge toll to get into the city had increased to $4, which is just insane. The way I see it, Philadelphia should pay people to come to their city. Really, they should have a man with a pocketful of cash at all city entrance points and he should be doling it out to visitors courageous enough to deal with the inconvenience of entering the city.

Anyway, the one other time I had gone to the flower show was some years back when I was in college, and I bought a Plumeria plant from a vendor who sold tropical Hawaiian flora. Plumerias are those pretty, flat flowers that they use to make Hawaiian leis. I purchased the plumeria stalks, some special plant food to give it, and set it up in my window at home. I know you'll all be shocked to hear that the plant never bloomed and instead died a slow death by dry-rot. So I steered clear of any tropicl plant delusions this past weekend.

As far as the vendors went, there wasn't anything there that really stood out. A lot of people specializing in orchids. I bought some garden shears which were a good value, and my mother bought a small watering can. The flower displays were truly magnificent. Have a look... 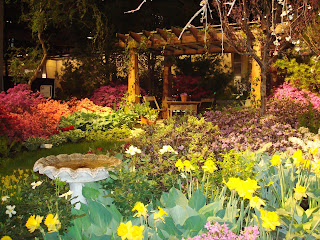 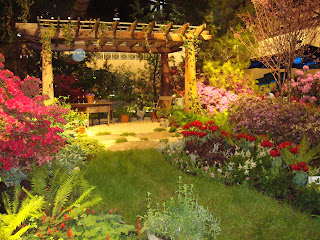 Lots of spring bulb action...and signs asking you not to touch. 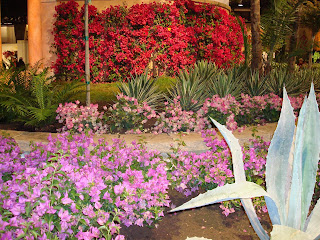 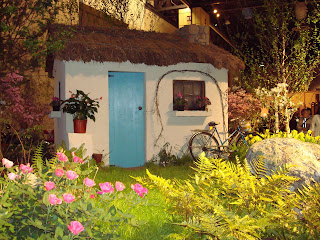 An Irish country cottage (nice detail with the bicycle.) 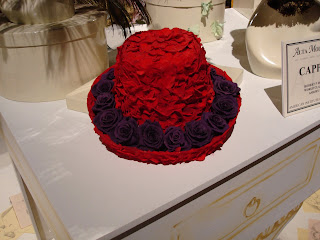 A perfectly sensible hat. Which just happens to be made entirely of rose petals. 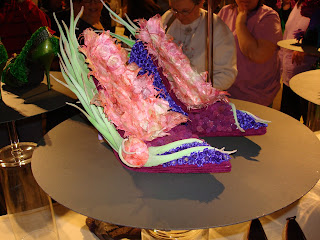 Afterwards, we strolled Reading Terminal Market, but the crowds were stifling. We went elsewhere for lunch, but really did enjoy the flower show. Even more, I enjoyed the day spent with Mom.

Email ThisBlogThis!Share to TwitterShare to FacebookShare to Pinterest
Labels: places