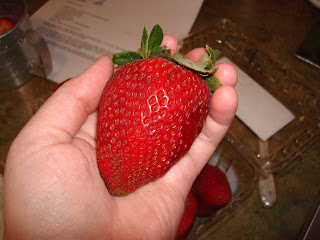 Okay readers, how many of you can appreciate just how enormous this strawberry is? Before you ask, no, we did not grow it. It is an organic berry from California which I bought at the market. All of the berries in the quart container were the same size as this one, so there were only about five or so in the pack. It was so beautiful that it was almost a pity to cut these up for the strawberry rhubarb dessert I made for a picnic. But that is what I did, and it was delicious!

Well. It was a lovely weekend of chores, family, and friends, but my secret mission was to actually get some decent rest. Alas, it did not happen. One evening, in the dead of night, we were awoken by the sound of a dozen rowdy Jewish Orthodox youth who had congregated under the street light in front of our house for a rousing good time. No, I couldn't make this up. About a dozen young men in white shirts and Hasidic hats, and one modest young lady were having a full-fledge party on the street in front of our house. Good for them, I thought. I can recall being a rowdy modestly-dressed youth once, too.

But that was just the warm up. On Saturday, after the sun went down and their Sabbath was officially over, a boisterous pool party was had up the road at the house where they were staying. The house with the in-ground pool, diving board and slide. Whoops and hollers and screams for hours, no holding back. I kept imagining them in swim trunks and their big black hats going down the slide. Again, I could only think, good for them.

It was with minor relief that I saw them put suitcases into a van on Sunday to head back to where ever they came from. They'll be back, as the next house over sits vacant most of the year until the summer when it comes alive with the owner's extended family who come to visit.


Yet our final nights of rest were marred by the dogs barking at trucks driving back to the fields to mess around with irrigation, even at midnight. The farmers have been very active in the back fields recently, and the dry conditions we've been experiencing are probably cause for lots of activity. 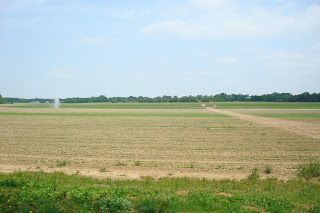 In the Garden: A farmer helped me out by giving me the name of the only chemical that kills that stupid beetle, the one that was eating all our tomatoes. I hated to spray anything on our plants, but I'm a realist and it was quite apparent that there would be no tomatoes at all if something wasn't done. Sure enough, the prescription is working. There was already some loss, but I've been planning more of a corn year than a tomato one anyway. Other than that, peas are coming in soon and everything looks great. Tons of labor = not a weed in sight.

In the Kitchen: More jam, and delicious strawberry rhubarb desserts. We're still eating from the pantry and freezer, trying to make space for all that we'll be preserving in the near future. Once you start getting stuff off the shelves and out of the depths of the ice box, you discover that there is plenty to eat.

To make crumble topping, put remaining 1 cup flour, light brown sugar, and butter, into a large bowl and crumble into a coarse texture using your fingertips or a pastry cutter. Scatter on top of rhubarb filling in baking dish. Bake until rhubarb is very tender and bubbly and crumble topping is golden brown, about 30 minutes.
Good served warm with ice cream.
Posted by Monica at 11:47 AM