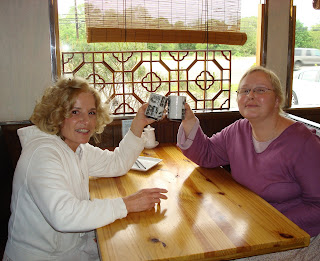 She was sitting in the hotel lobby on her phone. All tiny-boned and round brown eyes; true Swiss-Amish. Berne settlement, all the way. Very distinct.
Multiple hugs.
"I'm going to show you things you can only see here," I told Lucinda. Then I drove her to Philadelphia. Lots of excited chatter in Germ-ish. We talked about books, and dogs, and people, and how plain people think. We talked about Jesus. A lot. I told her how our dogs are "rescue dogs" and she declared us "BFF"- best friends forever. Then, she expressed a love of seafood and I declared us sisters.

We talked about healing, and education, and what life looks like after you leave a dysfunctional family situation. What life looks like after you take responsibility to end the cycle of abuse in your family, a cycle perpetuated by generations of people who will not discuss nor even acknowledge its existence. We talked about shining a light on abuse so it has no where to hide. We talked a lot about Amish and Mennonite culture and how beautiful the culture is, the culture that hides dark, dark secrets.

I took Lucy to see the Liberty Bell. "Because it's the symbol of freedom and you are now free," I told her. She acknowledged the analogy.

Then we walked to Penn's Landing on the Delaware river, where the founder of Pennsylvania once docked as he began his "holy experiment" to find a settlement for peaceful Christians. It was there we discussed how far our peaceful people have come, and how far we have fallen away from the peace wepurport to practice. And how much hope we have for greater peace between all people.

And we had fun. She declared me the perfect host, but the truth is, she is the perfect guest. So interested in everything, so easily entertained! Small, and mighty, and full of energy. My only goal was to wear her out. She made new friends wherever we went, whereas I stood reserved. Observing.

On the other hand, she says she finds me terribly interesting and full of good stories, which I'm not. It's just that I tell her more than I tell other people because I know she will get it, she will understand. Like how I used to cut school which was boring and go to the library and read about things to quench my insatiable thirst to learn. The very library I work in today. How that curiosity and thirst to learn just never, never goes away. And she so gets that. Or how during college, I cut my hair and wore jeans. But at the end of the day, I just wanted to put my hair up and wear a long skirt not because it wasany one's rule, but because it is authentically, who I am.

Before she left, we bowed our heads in prayer over sushi, us daughters of the Amish. She mentioned a movie deal, and a personal assistant, and television producers.
"You're going to get big, and forget about little people like me. Some day I won't be able to get you on the phone."
"I never forget my friends. And I never forget where I came from."