The Photo Albums: A Rescue Story 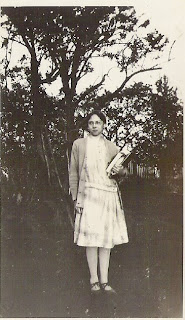 Recently, I became aware of two old photo albums from the 1930-1970's being sold (for the second time) that had belonged to a woman named Irene Stauffer. Irene had been a Mennonite school teacher at a mission in Florida, and later a teacher at Christopher Dock Mennonite School. She was also a noted genealogist. She never married, and had no children. Her personal photo albums had been sold once at a family auction to an antique dealer, and were on the block again. No one was particularly interested in buying them. The current owner told me that the family just wasn't interested in them, and wasn't into genealogy. He may have been right- I could not find anyone who wanted to claim these albums.

Now, some of my readers know that I have problems understanding how and why personal family photographs show up at yard sales, flea markets, or out by the curb for the trash truck. I truly just don't get it. Maybe it is because some of my ancestors would never have sat for a photograph, and I will never know what they looked like. When this is the case, it makes family pictures just a little more precious.

As I mulled it over in my head again and again, a different explanation started to form. One in which Irene's life was meaningless because she made unconventional choices. She did not marry, did not produce children, and so what? Was her legacy worth far less? It made me sad, and I admit, a bit angry that this has been the fate of this woman's treasured photographs. I had a great aunt myself who lived roughly the same years as Irene, who never married. In a fantastic coincidence, her name was also Irene. And when she passed on, our family wanted every scrap of her treasured papers and pictures. Why wouldn't Irene's great-nieces and nephews feel the same? I kept thinking about those albums, thinking about their uncertain fate, and how unappreciated they were as they changed hands from seller to seller. How no one could see the unique history and experiences that Irene carefully documented, such as pictures of her brothers in a conscientious objector camp in Tampa. And a brother who served in the army during the war. What a shame. Real history.

I don't mean to be so hard on the family. It could be that the very person who will appreciate these is not yet old enough to, or has not yet been born. So I wanted to figure out a way to make these accessible to that next generation.

And so, I bought them. I made up my mind to at least get them off of the market and paid a hefty price, with the plan being to donate them to the Lancaster Menn. Historical Society where they could be preserved in their archives. If they wanted them. Thankfully, they want them very much. They have some books Irene wrote in their collection, and with the economy being the way that it is and them being a non-profit, it was unlikely that they could have purchased them right now.

When I got the albums, a funny thing happened. I thought that I would feel sentimental about the pictures, and see them through the lens of my heart almost as an extended family. But that didn't happen. They looked like unwanted strangers, waiting at a train station for a train that never arrives. They all looked that way except for the pictures of Irene, who was starting to feel strangely familiar and comforting. Was she the black sheep of her family? You and me both, sister.

So before I take these precious pictures over to LMHS, I thought I would share a few with my readers. 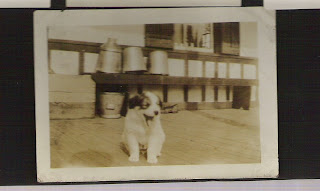 I love that there were pictures of dogs throughout the albums. This one was from 1929, and the name was "Rover." 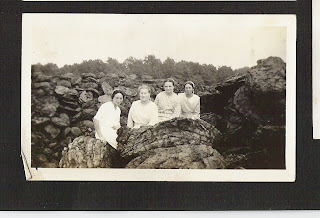 You've heard of Nickel Mines? These four young women were posing on the slag heap in the mines. 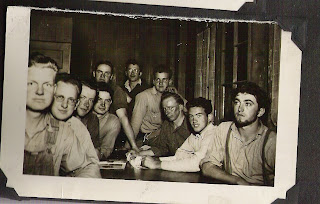 Mennonite (and one Amish?) CO's in Florida 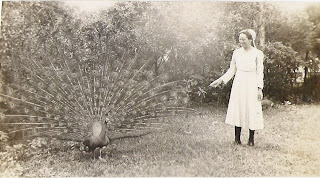 Posing with a peacock.
Posted by Monica at 11:03 PM