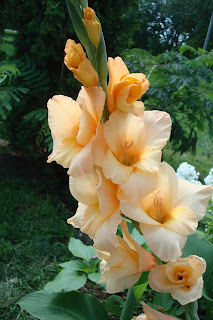 The e-mail was brief, yet its message mighty. "Twenty years ago, we graduated from High School."

Wow. Only twenty? It felt like a lifetime. I was sentimental about the message not because I am sentimental about high school. I am not. It was awful. How many times did I beg my parents to let me drop out at yearly intervals? "I could get my GED!" I told them. No go. High school was an enormous waste of time. I know not everyone feels that way, but in general, I didn't care for public schooling. What was meaningful about the e-mail was the messenger- an old friend, practically an adopted brother, who on his best day can barely remember a planned lunch together or what seven digits make up my my phone number. But he remembered the twenty year anniversary of the day we were set free. The day we were uncaged. The big plans we made and ideas we had would finally be allowed to become tried and true, or tried and failed. But at least we could try. We parted ways shortly after graduation, retreating into our separate worlds. We did not to see each other again for another fourteen years.

It used to be embarrassing to admit that I went to public school. Unlike the Amish, Mennonites are much less accepting of public education. When you tell someone that you didn't go to the church school, or that your mother did not lovingly homeschool you, it's met with some surprise. A couple of my cousins also did public high school, and one has turned out to be a staunch supporter of public education. "Is it really such a good thing that we pull all the Christians out of public school?" he asks. Food for thought. But I digress.

The day that you leave school, leave a job, leave an unhappy life, or leave grief may feel like "Independence Day", but it's a temporal liberation. And those are my thoughts on freedom.

Stand fast therefore in the liberty wherewith Christ hath made us free, and be not entangled again with the yoke of bondage. Galatians 5:1

By the way, when I left school I said that I would never go back. But I did. Three times. So, never say that you will never go back to school. It's a sure way to end up with an advanced degree.

In the Garden: The gladiola up top is from my front flower bed, and some more flowers are starting to come into bloom... 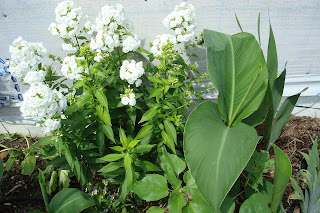 The white phlox next to some canna lillies which show no signs of blooming yet. 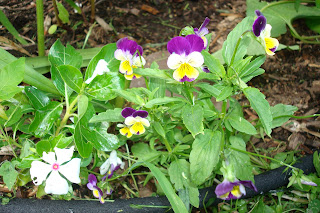 Viola- always a personal favorite. Don't their little flower faces look like they are smiling?


And look what I found in the vegetable garden... 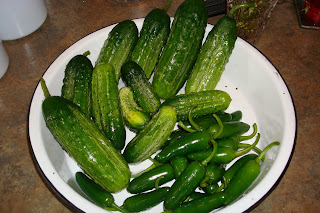 It may sound silly, but just seeing those cucumbers hanging on the vines made me immediately crave pickles. And so these became garlic dill spears, though they won't be ready for a couple weeks. The jalapenos will go in the freezer.

On the Table: Stuffed Poblano Peppers (These were delicious, if you like Mexican food.)

The less adventurous might like my cousin Elizabeth's tomato-zucchini bake...
Recipe:
Alternate layers of zucchini, then onions then tomatoes. Sprinkle Italian bread crumbs between each layer with bits of butter. End with the last layer of zucchini with bread crumbs on top. I cover and bake at 350 degrees until done. The amount you make will bake down to half the size, so use a large dish. Wonderful !!

I haven't tried it, but I trust her cooking and it's a good use of the early hothouse tomatoes that are everywhere.
Around the Home: A hilarious episode involving these storage bags where you suck the air out of them with a vacuum cleaner so as to minimize the space they take up. Not. Worth. The trouble. (Unless you are really, really desperate for space, like we are!)
Posted by Monica at 7:51 PM