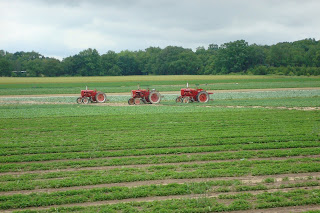 Someone asked about pictures of my garden. I guess I have not had many up since there is nothing close to harvest yet, now that peas and spinach are done. Also, it rained just about every day in June, so it was not easy to find a dry moment for pictures. A few stalks of corn are just now coming in to tassel, and peppers are growing. We've been getting hot peppers for a while, but most of the leafy greens, including lettuce, are done. I took these photos just a few days ago. The lettuce (on the right) has since gone to seed. Oh, and that giant irrigation hose reel does not belong to us! It's for the farm field. 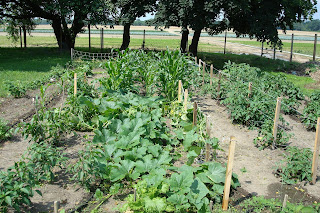 Front and center in this picture is an enormous winter squash plant, which I have to manage a bit as its tendrils want to cling on to hot pepper plants and adjacent cucumber vines. To the right of that is a row of tomatoes. For tomatoes, we're growing:

In addition, we have:

Things are starting to take off in the flower garden, so hopefully soon I can have those photos up. After a few weeks of day lilies, it was nice to see a gladiola start to bloom.

With all of the rain we have had, it has been a blessing not to have had any fungus problems.

In the Kitchen: Someone from church called and said they had a quantity of peaches and apples which I was welcome to, if I wanted to come over and have a look. Perhaps I can get some peaches canned before leaving on our trip next week. Now wouldn't that feel good?

On the Table: Crock pot lasagna and raspberry cream pie. The recipe for the lasagna is from the new Big Book of Fix it and Forget it, and while the recipe is very easy, I feel it could use some tweaking. The cream pie was an easy no-bake pie in a graham cracker crust.

On the Nightstand: Getting Along with People God's Way by John Coblentz.
Posted by Monica at 9:29 PM