It was late last Thursday night when I was driving home from the store. The road that connects our street to the highway is a long, dark country road with many shabby homes. There is constant foot traffic at all hours of the day and night, a dearth of irresponsible pet owners, and wild turkey and deer crossings at any time. In short, a collision course. I had already evaded a dog, a cat, and a man dressed all in black (flawlessly blending into the darkness- has he not heard of safety orange?) as I carefully navigated the road, high beams on. But I saw the deer too late, and all I could think as my car skidded towards the surprised animal was Please don't hit the windshield. I felt a thud as my car came to a stop, and the smell of burnt rubber from the tires filled the air. The acappella music coming from the cd player suddenly seemed annoying and more like a soundtrack to something awful. The deer was gone. Please don't let it be a blown tire. I hit the eject button and got out of the car to check the damage. The tire looked okay, but it was too dark to tell for certain. My front turn signal was obliterated, but the front headlight was fine. The animal probably wasn't hurt much at all, for which I was grateful. I recalled once when the Mister found a hit deer by the side of the road that was still alive, yet close to death, and him having to run home and retrieve a gun to put the poor animal out of misery.

I hope the groceries in the trunk are okay. Back at home, I was able to view the car better once our outside lights were on. The minimal damage to the car was something to be grateful for, but a feeling that something was trying to stop me from taking a planned road trip the next day nagged at me a little. Already I had postponed my trek the week before when it rained heavily, and now I had a broken front turn signal. Well, it was merely the calamity of the day, and I was going to make it anyway. It turned out to be the right decision.

The next afternoon I wound my way through Pennsylvania's country roads to breathe in the colorful display of red and gold leaves. Dried brown corn stalks still stood proudly, and pumpkin patches peppered the roadside. 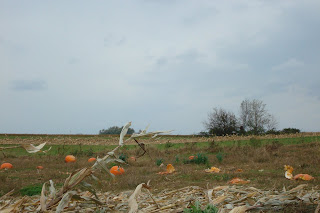 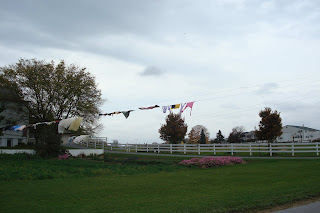 Filled clotheslines without an inch of space to spare waved in the breeze, and women working in their yards seemed to wag a finger at me, as that is a chore that still awaits my own neglected yard. A few light errands to run, visits to make, and the luxury of having all afternoon to do it provided the intangible gift of room to breathe. I always slightly envy the people who come into the library just to chat with the librarians. Don't they have a busy schedule like mine? Someplace to be at every hour of the day and a to-do list a mile long that needs completing before dark? In most circumstances, it would be unimaginable for me to have a day that consists of something as spontaneous as walking into a public place and chatting with strangers (let's forget for a moment that I'm pitiful at making small talk with cashiers, desk clerks, and other people I don't know). So I was a little hesitant to ask the clerk at the book store what was in the glass vials for sale by the register. But curiosity won.
"Saffron," he said.
"Yes, but why? What is the significance?"
"They say a lot of people around here use it for making noodles. Makes them yellow. A local woman grows it, and since we've been selling it, people have been calling us about it and wanting to buy some. It's seven times that price on the internet."

He asked if I had ever heard of making saffron noodles and I had to admit that it escaped me. Perhaps my grandmother would know something about it. Past memories of noodle making sessions kept running through my head, but saffron just wasn't in the picture. I paid for my purchase and thanked him, just pleased for once to be one of these people, if for only an afternoon, who have time for leisurely chat. But there is rarely rest for those who are passionate about learning, and now I'm on to investigating this odd connection between saffron and homemade noodles.
Posted by Monica at 9:40 PM

Email ThisBlogThis!Share to TwitterShare to FacebookShare to Pinterest
Labels: thoughts