Being more of a night owl than an early bird, there are quite a few things that I never get to see, such as, oh, say, the sunrise. It's not that I don't like to get up early, it's really more that I just can't. Even after having gone through several phases where I desperately wanted to be an early riser, and would set the clock for some optimistic time only to hit the snooze button so many times that I would inevitably get up even later than if the experiment had not been tried at all! Early mornings are just not how I'm programmed.
The Mister, on the other hand, is a natural early riser. He bounds out of bed with big plans in his head and taunts me with the phrase "Time to milk the cows!"
We don't have cows, and I'm SO grateful for that. Unless we could get them used to a midnight milking, we will never be a dairy family. You are more likely to find me at midnight with a book in hand or even a spatula, because I am lively after dark. It always seems a bit inconvenient

But since we've changed the clocks back, and the early morning light is suddenly filtering through our windows at a time that makes it seem later than it actually is, I've had the opportunity to not exactly get up with the roosters, but wake up early and see some rare autumn morning blessings. For instance, I was startled to see this lone (and thawing) dandelion puff standing prominently against some early morning patchy frost. It was the only one left, and maybe the last one for the year. 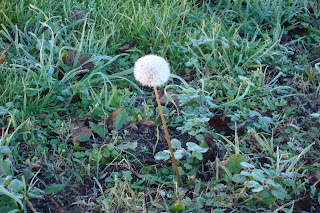 And then there was the early morning moon which was setting on one side as the sun came up on the other. I only see the moon at night, so this was a novelty. Such a lovely blue sky, too. 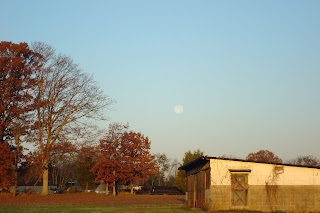 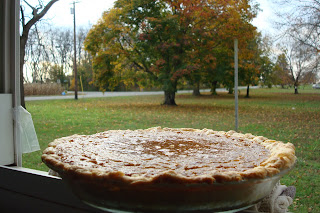 This is another fall treat cooling on the window. By the way, you may notice the pole in the foreground of this picture, which is an interesting topic in itself. We have many Orthodox Jewish neighbors, and these poles are scattered around their property and have some religious significance. I believe it's called an eruv and it is a symbolic fence that allows observant Jews to carry things on the Sabbath. We didn't know what it was when we first moved here, and actually used to use it to tether our dog when we were working outside! (We don't do that any more.)