My Attempt at Rug Making

Some of you might remember that a few months ago I treated myself to a class on how to make floor rugs from your old scraps of fabric. These are also called toothbrush rugs, because you use a small plastic stick with a hole in it that looks like a toothbrush handle to make them. At the time it seemed like such a good idea- and a great way to use up all those old, fading scraps in my fabric bin. And how economical! Anyway, it turned out to be more than I bargained for, and definitely no bargain.

First, learning to do this turned out to be even harder than I thought. We were told to read the pattern before taking the class, which I did, but I couldn't seem to grasp even the basic fundamentals of joining strips of fabric together in a weave-like fashion. It was mildly satisfying that only one of the eight women in my class was able to get the hang of it, and the one who did find it easy had a background in knitting and crochet. The instructor, a gruff woman who travels the country in an RV going around to quilt shops teaching this class, kept insisting it was easy. She would espouse its easiness between reprimanding her small dog which was wearing a sequined dress. Yes, really. She kept asking us "Isn't this easy?" and I wanted to say, "No, making clothes and quilting is easy, but this is really hard!" But I was really thankful when, after mentioning that I am dyslexic, the instructor saw that I really couldn't get the hang of it and helped me out by doing the first several rows of my rug for me. Without her doing those base rows, there is no way that I would have ever been able to finish it. After purchasing the pattern, materials, and putting out money for a four hour class, I quickly saw the rug as false economy- you could buy one for less than I spent learning to make it. You would have to make several rugs in order to get your money out of this experience. I had really hoped that I would not only become good at making these rugs, but really enjoy it as well. Unfortunately, after making just one of these, I know that scrap rug making isn't for me. At its worst, it was hard. At its best, it was redundant. But at least I finished what I started: 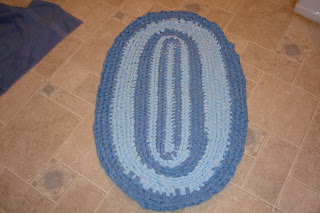 It's not pretty, but it's pretty useful!

Around the Home: I've never been one of those ladies who are so good at couponing that I can display a bounty of brand-name goods and announce that I paid some ridiculous price for them, like less than a dollar. Although I make some good deals here and there, we never seem to use the things that are on triple sale and would be virtually free, if only we used them. That 's why I felt like SUCH the smart shopper this weekend when I scored 3 free boxes of tissue, a free sour cream, and a can of soup for 9 cents. That just never happens.