Here is my confession. I dislike telephones. No, not just mobile ones, all of them. This is a terrible affliction to have in modern society. Really, it would be more acceptable to most people if I were to adopt some odd and suspect behavior such as pipe-smoking rather than publicly admit to telephone rejection. This is, after all, a day and age when people not only carry phones with them at all times, but are mighty close to having them implanted into their heads. And had you known me during my teen years, that is exactly the fate you would have predicted for me- a cranial phone implant. But somewhere along the line, I lost it. That is, I lost the pleasurable sensation of lengthy phone calls and the curiosity that makes one rush to the phone when it rings. It just flew out the window one day and never came back. The invention of e-mail (of which I was a late adapter) may have played a role in this loss. Or it may be that since I routinely spend about 15 hours of the week helping to answer the phone at the library, I'm just too tired to deal with a ringing phone in my own home. Really, since I have often answered our home phone by saying "Reference desk, can I help you?" much to the startled surprise of the caller, this may be a viable theory.

It's practically a social disease in itself to dislike phones. Family and friends who do not have e-mail are more likely to receive a hand written letter from me, but in these busy days, they sometimes don't hear from me at all. Yes, it's is regrettable and sad. People are somewhat mystified when I don't freely rattle off my cell phone number so they can
interrupt call me anytime.
"You do have one, don't you?"
"Well yes, it's just that I don't use it regularly, it's just for emergencies."
They look at me uncomprehendingly. Once a year I check the voice mail on it and delete ancient messages left from strangers who mistakenly called my phone and left a message in my abyss of unchecked voice mails. More people dialing the wrong number call that phone than people calling intentionally. This is a phenomena that extends to our home phone too, where voice mail messages hang in limbo for days until the Mister asks if I have checked for them lately. My husband then spends ten minutes or so collecting messages which he than relays to me, somewhat aware that I would rather bury my head in the sand than call anyone back.
"You really need to try to remember to check for messages" he told me during the time of his grandfather's sickness. And during that time, I did. If it's important, it's easy to remember, but when that phone rings these days it's rarely important. Case in point:

First, it only rings when I'm doing something delicate, like trying to precariously place a liquid pie in the oven. Then, if I can get to the ringing phone in time, it's almost never a call from friends or family. It is almost always a call from someone seeking donations or an automated political message. In the past two days I have received automated calls from both former New York mayor Rudy Giuliani and Steve Forbes. We would have rather they came for a visit. ;-)

Once, I lobbied the Mister to get rid of the phone. That went nowhere, and rightly so. That disruptive ring isn't always pleasant, but it's necessary.

At the root of my disdain for the telephone, I can only account for it by my preference for quiet, concentration, and the written word just slightly more than instant communication. Don't get me wrong, the phone has its purpose. But it will never replace the e-mails that brighten my day, or cards in the mail that get taped to the wall, or the undisturbed quiet of a Sunday afternoon. Somehow, these things ring louder.

In the Kitchen: The stories I had heard about making crackers always sounded intimidating. Then, I found a homemade cracker recipe that looked fool proof. With optimistic visions of filling up the cracker tin, I set out to mix up my own batch. Well, the first batch of dough came out so poorly it was discarded. The second batch was fine, but the process of cutting these paper thin pieces of dough and then transferring them to a baking sheet was excruciating. So what I ended up with were these oddly shaped cookie-like things that sort of taste like crackers. File these under "R" for rustic. 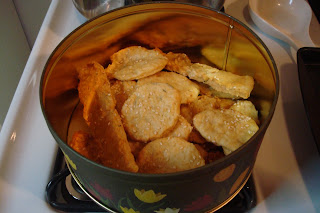 Around the Home: I'm really loving lock and lock storage containers after receiving some as a gift. In fact, everything in my pantry that is not in a tin or canister is getting transferred to these containers. They are transparent and so high quality. As always, shop around for the best price.

PS: It turns out that saffron is used not in the making of the noodles, but a pinch or two is added when cooking the noodles along with the browned butter you usually put on them, to give them just a little bit of an interesting flavor. And this is purely a regional Pennsylvania thing, which explains why there is a whole lot of people who have never heard of this.
Posted by Monica at 8:05 PM