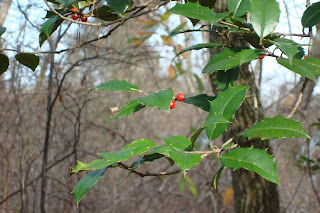 Once, in my youth, a brave family member sent us a Christmas letter on special themed paper filled with family news and success stories. It was ridiculed at our house as vain and prideful, and my parents would no sooner have penned a Christmas letter than rented a billboard to tell of our family news. Of course, things to brag about in those days were in short supply, but you get the point. Imagine my surprise when I married a man who not only expected me to write a Christmas letter, but came from a family where nearly everyone sent them. It was my own private culture shock. But I fell into writing it with ease, and even enjoyed it. But I can't bring myself to report on the slow news day that has been the past year.

This weekend I suggested to The Mister that we not send out a Christmas letter this year. It just wasn't that exciting a year. Compared to our friends who welcomed new babies and finished their home renovations, there is not enough on our end that would fill more than a paragraph. We pretty much carried out our year engrossed in the daily labor of working on our own property, and all the seasonal tasks we usually accomplish. We did not have any tragedies (praise the Lord!), nor did we have any major changes for better or worse. Those close to us, who would be interested, already know who our visitors were, where we took trips to, and the status of our home renovation. They don't know the gritty secrets, such as our future plans- where we want to relocate, when I plan to stop working, and other secret things. And we aren't going to tell them, and certainly not in a Christmas letter.

Although we are thankful, we are not going to expound on the mundane. That my husband enjoys steady and fruitful employment at his job, that I still attempt to create some good in the world through the library, and that our house remains a work in progress. Our family is well, there were no deaths, and we acquired no new pets or properties. I could probably write a few sentences about my neck problems and repeated chiropractor visits and the pain-management doctor, and how it was getting worse and not better until some people started praying about it. Could probably, but would not.

We don't have any funny anecdotes to share, or perhaps writing them down would not do them justice. An annual letter can't convey the mixed feeling of dark humor that comes every time another 75-year-old termite eaten board is pulled out of our floor, created by insects who lived before we were born. It also can't accurately communicate how it felt like a joke was played on us to discover that our simple, mixed breed dog Buddy, a former stray, was actually an exotic middle-eastern breed, proving our family motto that good dogs are often free.

We had no great adventures, nor phenomenal revelations. We had a simple year of hard work and quietly served the Lord the best we could. It was a good year, and I think I have just written a brief Christmas letter right here, in a round about way.

Menu Plan Monday? There were a few reasons I stopped participating in Menu Plan Monday, the main one being that it was just too boring for me to write the same meals we eat over and over, week after week. Then you would have to link it back to the site that sponsors MPM, and I might have gotten a little lazy about that. So now I just post an occasional recipe that is maybe new or interesting. But if there is enough demand, I might start participating again. So what do you think?
Posted by Monica at 10:15 AM

Email ThisBlogThis!Share to TwitterShare to FacebookShare to Pinterest
Labels: thoughts