Visits from Strangers: Part 2 of 2 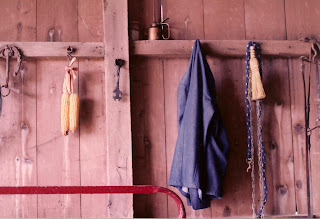 Long before the Tool man came to town, there was an even more hair raising episode involving a night time intruder. This one happened one winter when my Uncle was still alive. It was my cousin Ruth who went downstairs during the night and saw a stranger lying on the couch. I awoke to find her paralyzed with fear, standing in my room, her hands clasped over her own mouth as if to stop herself from screaming. Even in the dark, you could see her eyes were big with fear. When I asked what was wrong, she shook her head and clasped her mouth harder. Finally, she told me there was a strange man asleep on the couch downstairs. There we were, young women in our night shirts with our hair hanging down, too terrified for a minute to do anything or even leave the dark room.

We need to tell Uncle Eli.

We knew there was a .22 under our aunt and uncle's bed, though that is not to insinuate that a shoot-out was going to take place. When we woke our Uncle, he got dressed with the speed and earnestness of someone with an important matter to attend to at once, but did not show an ounce of fear. It was almost as if an unexpected visitor had simply arrived early and he was concerned for them. Aunt Dorcas stayed in the bedroom while Eli walked downstairs with a flashlight, two scared young women in tow, a few steps behind. When my uncle got to the bottom of the stairs, he stopped and yelled out a greeting to the sleeping man. We were still behind on the steps and couldn't see anything beyond the beam from the flashlight. We found out later that the man stirred, looked at Eli, and rolled over to face the back of the couch, and continued to sleep. How brazen! Was this man in his right mind? Anyway, my cousin and I were told to go back to bed and not worry, that it would be okay and that my uncle would take care of the sleepy vagrant in the living room. That was a hard one to stomach, and we both went into my room and closed the door. I don't think either of us fell asleep readily. What I didn't know that night was that when my uncle was a boy in the great depression, many "hobos" or "tramps" found their way to family farms offering to work in exchange for a meal, or even just asking for a spot in the barn to sleep in before they set out again at day light to continue looking for work. So while this hadn't happened in may years, it still looked somewhat familiar to him, and was not such a big deal. Not the big deal it would be to you or I if we found a stranger asleep in our house in the middle of the night!

In the morning, we went down to find my aunt making breakfast, but no sign of the guest. It turned out that the man had woken up around four and told Eli that his car had crashed into a utility pole up the road. The man had walked here looking for help. Finding the door unlocked, he came in, took off his boots, and fell asleep. He didn't want to wake anyone or call the police because the police didn't like him, and also he had a friend who could tow the car for a lot less than the county would charge. Eli showed him the phone in the barn, and while the man was calling his friend, our neighbor Roy stopped by to ask us if we heard any noise last night because there was a car wrapped around a pole just up the road? Roy also informed us that there was a police car there. When the man came in from the barn and heard about the police car, he thanked us for a cup of coffee and beat a hasty retreat out the door to go meet his friend. His hair sticking up in all directions, and his boots back on, the disheveled stranger disappeared fast, but left behind something important. It seems his boots weren't the only thing to come off during the night, as we found a prosthetic arm laying outside the front door which must have come off as he stumbled into the house during the night. The arm, with a hook at the end, hung around my uncle's house until after his death. We had thought its owner might come back and claim it, but he never did. It was sold in a family sale.

Many people asked us about the "unarmed intruder" for a long time.
Posted by Monica at 10:31 AM