It was an uphill battle from the start. You see, I pieced it, and was full of good intentions to finish it in a timely manner when the first hurdle appeared. We announced our engagement. With a wedding looming on the horizon, a dress to make for the special day, and non-stop dates with a realtor in our search for a home, it laid dormant for a year. That second winter, I picked it up again and kept at it, stabbing it with the needle in tiny stitches. A few stitches here, a couple more there. A whole block. Sigh. It would take forever and I was already so tired of seeing it. I didn't even like the looks of it anymore! And then the snow days happened, providing endless time to stitch away, until finally, one winter night, the last "X" was quilted on a corner square and the hard part was done. It was finally time to dig out the old binding that I made a hundred years ago and sew it on. 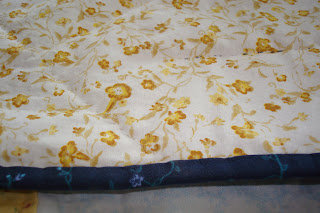 But then, to just put the binding on without any complications would not be in line with this quilting odyssey. So one evening last week there was a flat tire that set off a whole chain of events that ended with a time-pressing crunch as I attempted to get to my sewing spot to finish it off. I finally did arrive, and in just a few hours had the binding sewn on my ancient "eternity" quilt that took an eternity to finish. (It's actually not an eternity design- it's called a "variable star" pattern.) 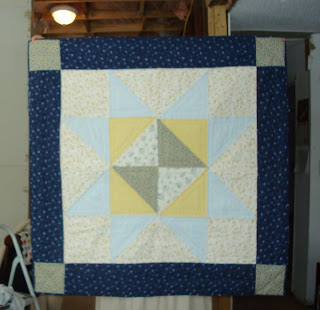 The specs: Variable Star lap quilt, finished size 45"x45"
Machine pieced, Hand quilted
Fabric: Cheap stuff from JoAnn (because I wasn't confident on how this was going to turn out and didn't want to invest a lot in good fabric. Also, there were no nearby quilt shops around when I started this, but in the time it took me to complete this project, two have since opened!) 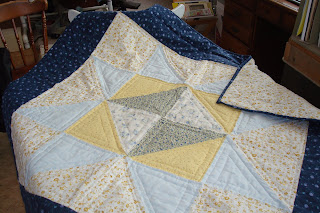 Yes, I'm glad that's over. I am not someone who likes unfinished projects hanging around that never seem to get done, so you could probably hear my sigh of relief when this was finished from wherever you are located.

February is always the hardest month for me. My energy level is LOW Low low and I'm worn out from the weather. It's hard to find balance during the darkest moment of the year, but let me try...

I'm giving thanks for the ten pounds of venison sausage that was given to us by a generous coworker of my husband's. That should make for some easy meals.

I'm enormously thankful that when that flat tire happened on the interstate, at rush hour, a nice man from the state Dept. of Trans. was nearby and saw me right away, put on my spare tire, and got me back on the road in under twenty minutes! Talk about tax dollars at work.

I'm barely surviving the mud, but giving thanks that I saw something green under melted snow this morning. And a robin in the front yard last week.