Scenes from the Garden 2010

**The giveaway below is still running, so just scroll down if you'd like to enter to win a $40 gift certificate to CSN Stores.***

Had you been in our garden this morning, you would have observed a woman who made a spur of the moment decision to make a quick pass through the garden as soon as she was fresh out of bed. And being fresh out of bed, said woman would have been adorned in night clothes and a long tangle of hair, and not at all worried about being seen in her own backyard, which is enclosed with a sturdy and private wooden fence. Of course, this woman was very surprised, as she was filling up the watering bucket, to see a tractor drive by closely along the fence. It was driven by a farmer, high up on his seat, who had a bird's eye view of a disheveled woman filling a watering can and gaping at the surprise tractor. This woman took cover in the corn stalks, but was comforted by the hasty retreat of the tractor. That is, until she emerged just in time for the tractor to make a second pass on its way out, with our heroine in full view. Well, after all this post is entitled Scenes from the Garden, and that was a real scene, as my mother might say.

Now, on to some better scenery... 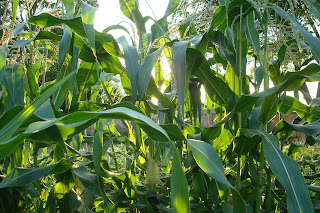 This year I grew Silver Queen corn, as opposed to the usual bicolors and heirloom types I've grown in the past. The stalks are green and healthy, and far taller. We don't treat our corn or use pesticides, and have had a lot of success, an unusual victory in the face of the dreaded and ever present corn worm which rules our area of the country. 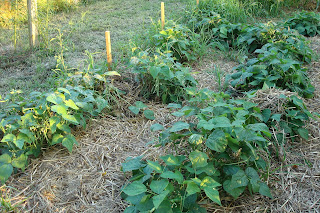 Our string beans, grown from seed like everything else, have been phenomenal producers this year. These two short rows have kept me busy for many hours! Oh, and the straw mulch? A real life saver during this dry summer. It has done so much to keep the moisture in the ground. 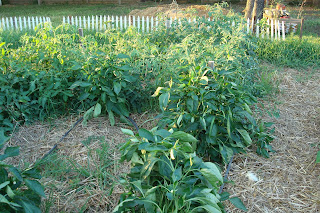 Peppers on the right, tomatoes on the left and in back. So far this has been a great summer for tomatoes, such a change from last year. There has been a lot of green leafy growth which means more pruning, but the fruit has been good quality. I've been canning tomatoes all week and we are not even at the peak yet. 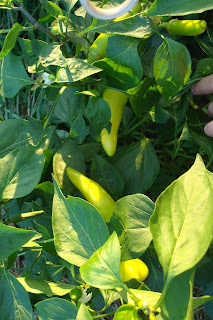 Each year I do some hot peppers. I still have enough jalapenos and serranos from previous years to set the world on fire. These are Hungarian wax, a relative of banana peppers. I did not grow them intentionally, they were a surprise that grew out of a packet of mixed hot pepper seeds. 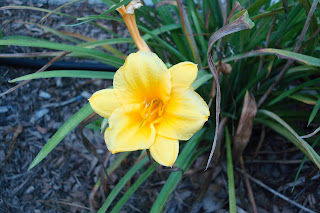 I usually plant a few flowers in the vegetable garden, but that wasn't possible this year. So here is a day lily from my front flower bed. 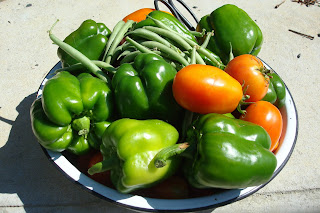 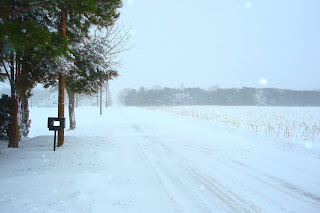 Anyone remember this scene last winter? 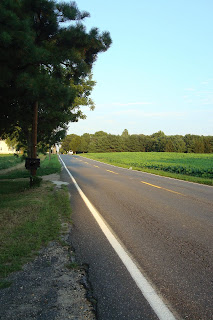