With One Hand Tied Behind My Back

About a week after I came home from the hospital, the Mister and I had to decide whether we were going to save our garden. Although it was routinely watered, three weeks worth of neglect had taken its toll. Some of the weeds were a foot high, and they were so abundant that even with two good hands it would have been nearly impossible to clean up our plot without hiring a lot of help. The Mister has been busy rebuilding the sub floor in our house -a very important project that I did not want to take him away from to help pull weeds. One night as I stood in the midst of our overrun vegetable garden, I mentally calculated how much money it saves us, and how we eat from it all year. Most of our tomato plants have large green fruit on the vines. There had to be some way to get a grip on this thing. Then, that night, a cousin told me that if we put down a layer of straw, it would kill the weeds, depriving them of sun. Of course! Why didn't we think of this? So bails were purchased and after pulling out the worst weeds, I spread out the straw. 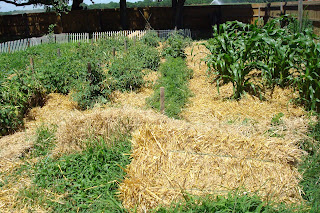 It's a very different look for my garden, but if it works I certainly won't mind it! Meanwhile, I also trimmed back the tomatoes and engaged in some tactical staking which I dubbed Operation-Get-Tomatoes-Off-The-Ground.

I'm slowly reclaiming life in little ways. The doctor has me going to wound care/physical therapy three times a week because she feels it will heal faster that way. It sounds strange, but I have to do exercises to get the joints in my thumb working again. Meanwhile, I am driving and shopping and starting to cook again.

One night I noticed a flyer on the table advertising cherries on sale. It was time to can cherries, and here I am with a messed up hand. There would have been no way I could have canned our year's supply of cherries had I not purchased a new cherry stoner on a whim some months back. It was the end of a long day of errands and shopping, and as I was ready to leave the dry good store, I saw they had cherry stoners on display. It was actually on my "need list" to get a better one so I could process more cherries, and the price was very good. Good thing I bought it. My thumb did not need to be used at all to work this new one, and I was able to get our cherries done. Amazing how that worked out.

While I have not heard the word drought yet, it has been very dry in our neck of the woods. The one or two thunder showers we get a week last only about five minutes and barely settle the dust. 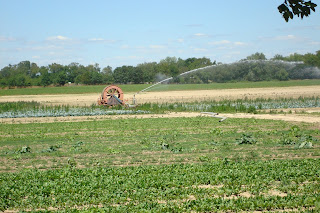 Thank you once again for all of your prayers! May you all be blessed in ways you need it most.
Posted by Monica at 10:51 PM

Email ThisBlogThis!Share to TwitterShare to FacebookShare to Pinterest
Labels: gardening