Wisdom from the Farmer's Market 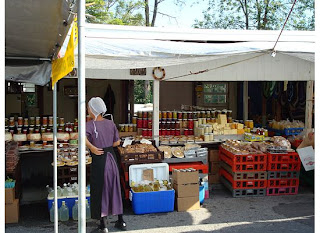 There are still many fleeting memories in my head of holding on to my mother's hand (or maybe my grandmother's) while the older women shopped for fresh produce and good deals at the farmer's market. The smell of fresh peaches, corn, and baking pies at some of the places where we shopped the most still haunt a long buried corner of my mind which reignites every summer. Many of these small, family-owned farm stands were places that I took for granted until they started disappearing, replaced by subdivisions and mass market grocery stores. But I'm glad to see that there are still so many places where local farmers take pride in growing and selling the freshest of the fresh. I will shop them first right up until the last pumpkin is sold, and then return as soon as the doors open again in the spring. Farm markets offer a greater selection of things than I could ever reasonably grow in my small garden, and at pennies for what it would cost me too!

Here are a few snippets of wisdom I have gathered over the years from shopping directly from the grower:

Know your prices. Sometimes this means shopping around, going to a few markets without intending to buy anything. You just want to check out the going rates on things, and see who is offering the lowest prices. This way you can set your compass and know what items are worth at any point in time. You would be surprised how much prices can differ from less than a mile down the road. Don't be afraid to do this by phone either. My husband has told me some very funny stories from when his family owned a farm market in which the owners of other markets would discreetly call around to find out how much the competition was charging for things. If they can do it, so can you!

Beware the high-pressure sales person. This is someone who had a bumper crop of something, and if they can't move it, then it's going to rot. You are the target. Be firm in reminding yourself what you came to buy, how much you wanted to spend, and whether or not the "deal" they are offering is going to be worth your time. Will you eat it before it goes bad? Do you have all day to freeze it? If not, can you give it away to someone who needs it? It could work out in your favor, or you could spend an already busy today fooling around with bushels of overripe tomatoes due to your inability to say no. (Yes, that actually happened to me once!)

Shop late in the day. Prices go down as the end of the day nears, because produce that's been sitting at a stand all day has a short life. Sellers know that it's better to sell at a steep discount than to not sell at all and have something go to waste. A few months ago, a farmer gave me several quarts of strawberries for free because it was nearing the end of the selling day and the berries were getting soft. I didn't care that they were soft. I took them home and mashed them up to make jam.

Ask the price. This was a technique I came across by accident, mostly due to my dyslexia and inability to notice signage. I would ask what the price of something was, and before leaving discovered there was a sign I did not see that had a higher price on it. Now why would someone tell you something costs less than what they are advertising? A couple of reasons. They would rather someone purchase it than have to haul it back home. Or maybe It's not selling well at the advertised price. Or perhaps they recognize you as a regular customer and just want to make you feel like you are getting a special deal. Which brings me to the next point...

Become a regular. I'm always amazed and somewhat flattered that the farmers I buy from seem to lower their prices "just for me" as the season goes on. This is just another way of thanking you for being a good customer and making sure you'll come back next year. Consistency does seem to pay off.

So. Is anyone else getting any good deals at the farm markets?
Posted by Monica at 12:06 PM