Recently, there was a news article about pie (slow news day) and whether it could possibly be the next happening dessert, perhaps even overtaking cupcakes as the new choice for the next generation of cookbooks, pie-centric bakeries, etc. The writer gave several reasons why this is not likely to happen. For instance, cupcakes are cute, portable, and a favorite for children's birthday parties. Let's face it, harried mothers who have to provide a dessert for lots of their child's friends want to grab a mix off the store shelves and throw on some icing and sprinkles for a quick worry-free dessert. And there is nothing wrong with that. But then the writer argued that children don't like pie. Huh? Well you could have fooled me because I've yet to see a child turn down a piece of pie, and although a slice of apple crumb is not nearly as colorful as a cupcake with dyed frosting and topped with candy confetti, I can't imagine a child turning up their nose at it. As a child, I was always fascinated by the fluffy layer of meringue on top of a bright lemon filling. Maybe I wasn't as sophisticated as today's children. We always had pie at family events, and meals where guests came over for dinner. I've mentioned a few times how my mother briefly had a pie-making business from home when I was a girl. Two of the things I most fondly remember from those times were helping to peel and slice apples, and actually being trusted to count the money! So yes, pies are a family tradition that I don't mind carrying on, and others know it. When I walked into the library one day carrying a laptop messenger bag on its side, a friend approached me and asked eagerly "Is there a pie in there?" (No, it was a cobbler in an unconventional casserole carrier.)

Another reason for pie's improbable popularity is the crust. So many people struggle with pie crust. That's why I always start my pie recipes with the instruction to just make a crust happen, anyway you prefer to do that.

You may be wondering why I'm talking about pie during cookie season. Yes, I make cookies during this time of year, too, but not as many as you might think. Thanks to my mother-in-law, The Mister's side of the family is well supplied with cookies well into February. And although I enjoy an occasional cookie, cookies generally don't make my list of all time dessert favorites. Lattice, crumb-topped, custard or whoopie, I like pies. So I wanted to feature a couple of pies during the month of December, and I'm going to give you all an easy one to start with because it has no crust. In fact, it's debatable on whether it's really even a pie. A couple years ago I mentioned Pumpkin Whoopie Pies here, but never gave a recipe. Since then, as soon as pumpkin season starts, I get e-mails requesting the recipe. So it's high time I post it: 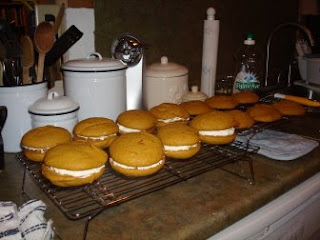 In a large bowl, combine flour, salt, baking powder, baking soda, cinnamon, ginger, and cloves, set aside.
In your mixing bowl, whisk the brown sugar and oil together until combined. Add the chilled pumpkin puree and whisk to combine thoroughly. Add the eggs and vanilla. Add the flour to the pumpkin mixture a little at a time until completely combined.
Using a large spoon, drop heaping tablespoons of the dough onto the prepared baking sheets, spaced evenly apart. Bake for 10 to 12 minutes, until a toothpick inserted into the center of a cookie comes out clean. Remove from the oven and let the cookies cool completely before adding the filling.
Cream Cheese Filling- (Lazy girl work-around: Buy some whipped cream cheese icing from the baking aisle to use for filling.)
Sift powdered sugar into a medium bowl and set aside.
In the bowl of an electric mixer fitted with the paddle attachment, beat the butter until it is completely smooth, with no visible lumps. Add the cream cheese and beat until combined.
Add the confectioners’ sugar and vanilla and beat until smooth. Do not over-beat the filling.
Spread filling between pumpkin cookies to make a sandwich and enjoy! This makes about two dozen pies, depending on how large you make them. These also freeze very well.
Posted by Monica at 6:35 PM