Remember picture day? Of course you do. It was the day your family hauled you off to a generic studio at a department store for a family picture to send Aunt Verna. Maybe you got your picture taken in school. If you were like my family, someone snapped an informal picture of your family at a wedding, and your growth spurt which created a too-short dress that didn't quite cover your knee socks was preserved for all time.

Let me start off by saying that I don't know how any family with more than three members manages to get out the door in one unified, pleasant-looking swoop for a photo session. It was hard enough to find a photographer, plan a date and time, select and press clothing, and make sure it coincided with a hair cut for The Mister. But then to have to get us all dressed and neat looking, out of the house with minimal fuss, and arrive at our destination unwrinkled and fresh, well, we won't be doing this too often. In the past, when I would receive a family photo with, say, some sane looking couple and their five, seven, or nine children, I would just think something along the lines of they got together for a lovely picture. How nice.

Now, I think something like, they must have had sixteen personal assistants, a military strategist, and a mission statement. How nice. I have a whole new appreciation for seventy percent of the pictures on our fridge.

It was important to me to have a few good current pictures of Duckling since all of his one-year birthday pictures were terrible, and he moves faster than my camera shutter, like a caffeine fueled kangaroo. Hiring a professional seemed like the only thing I could do at this point, so I found a lady who specializes in quality pictures that are also affordable. It's part of her philosophy, and I really like that concept.

"I scheduled a family portrait shoot for next Monday..."
"What? Why can't we just get someone we know to take our picture?"
"Oh, and who would that be?"
"Well, my Uncle Bob has a camera and takes some pictures."
"Yes, well, Uncle Bob's skills aren't what they used to be since he turned ninety, and his camera is perpetually set on the landscape setting. It's hard to communicate to him that it makes me look extra-wide since he keeps his hearing aid turned off."

The photographer had a delightful little Christmas scene set up in her studio, a decorated tree and these adorable vintage toys. She even had a little red Radio Flyer tricycle just like the one that I rode as a young girl.Unfortunately, as we awkwardly huddled on the hard floor in an unnatural pose in front of decorations that would be alien in our home, we exuded a sense of discomfort and most of those pictures did not make the cut.


Right around this time, Duckling was suffering from a perpetual cold and an increase of unsettling behavior. Not only was smiling not on his agenda, but outright frowns were the order of the day. By the time we moved the session outdoors, we found ourselves chasing him down as he attempted to run away from his crazy smiling parents. He was probably going to join the circus as That Baby Who Frowns A Lot. 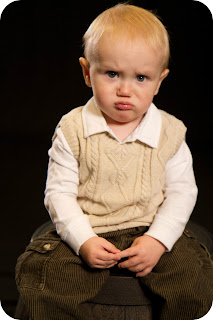 An hour later we exhaled and picture day was a wrap, preserved for all time. The fruits of my pressing, spraying, and motivational speeches had been digitized. Around the holidays, some loved one, somewhere, opened an envelope from us and thought... 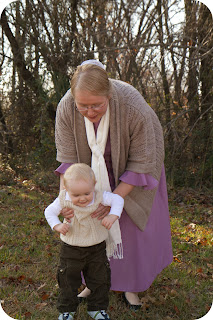 ...they got together for a lovely picture. How nice.