Last week, I saw a beautiful picture that no one could never capture. A man leaning against a window, his crisp shirt and best Sunday vest a perfect complement to the white wood frame and clean window glass. A perfect silhouette, his hands folded in prayer as a halo of sunlight surrounded him. Then he wiped away a tear. Those who saw it knew his prayer. A sick wife, doctors and treatments and fear. It was a holy moment, never to be recorded by film but painted for a moment in time on a canvas of faith.

I'll never know who else quietly observed the discreet prayer said in the open, but I understood the lesson. We are constantly being shown faithfulness and love, and each moment that we notice and capture in whatever way we can is a gift. A twinkling jewel in our hand that will fade with memory and lose luster in time, but it sparkles for us for a season. The jewels are not rare, they are abundant. Sometimes they are recorded and shared, but more often they are tucked away in our hearts. At the worst times, they go unnoticed and are ignored completely. Lord, help me to notice each one.

Later that same day, our family drove to the beach and showed Little Mister the wonderful ocean for the first time. There, I witnessed and captured many moments of wonder, curiosity, and awe. 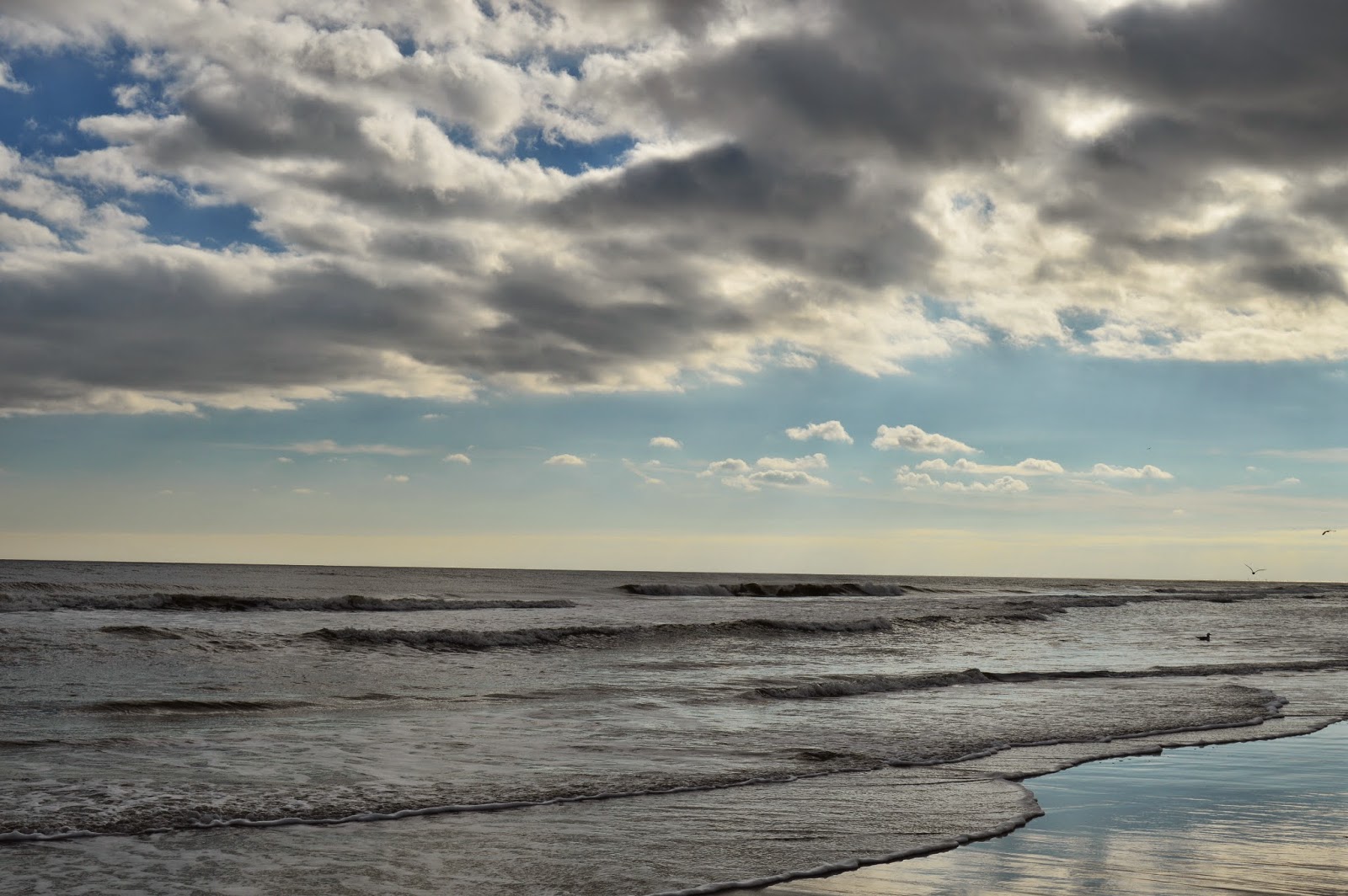 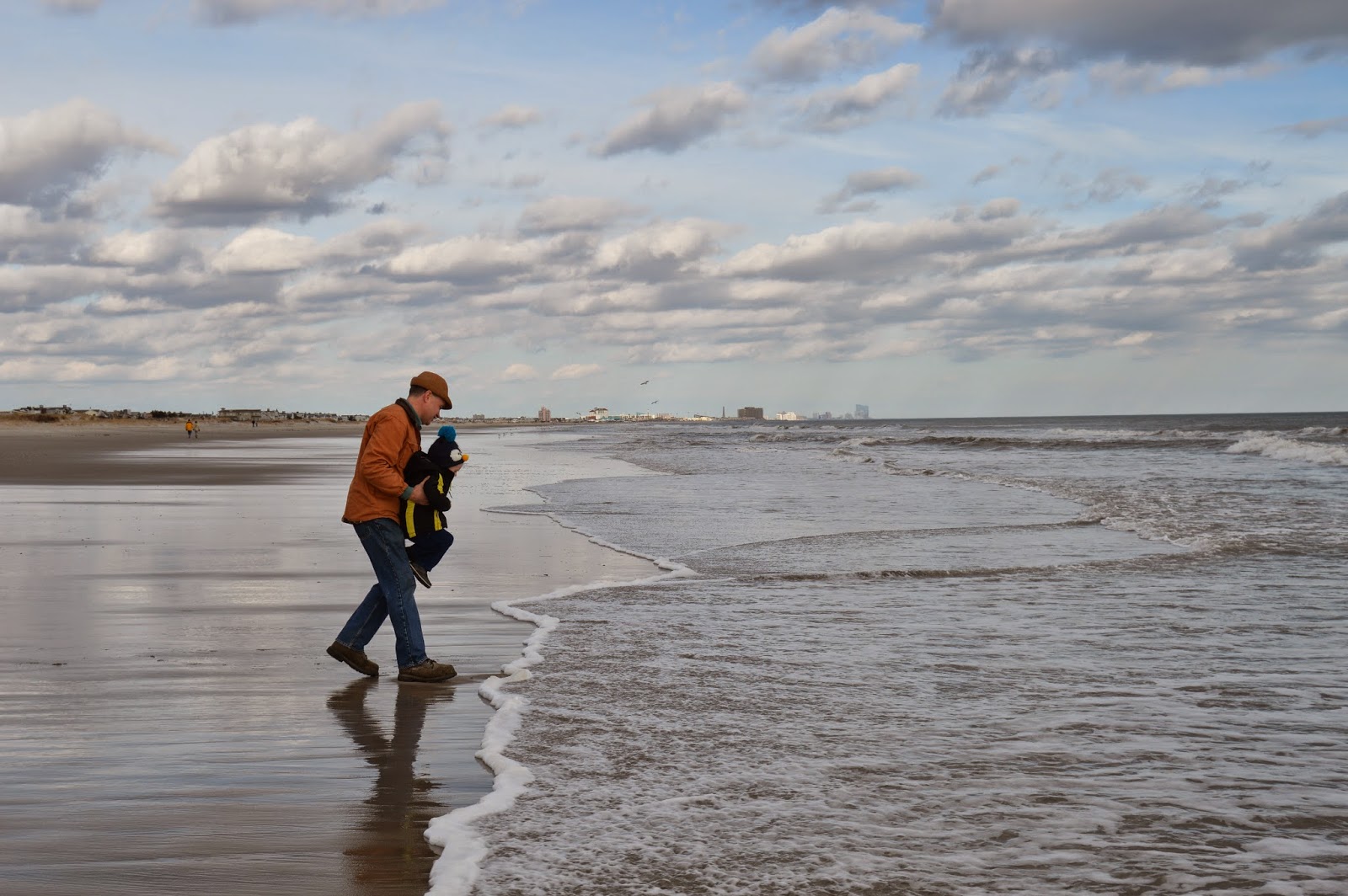 Someone was a little surprised to discover that the waves come AT you. 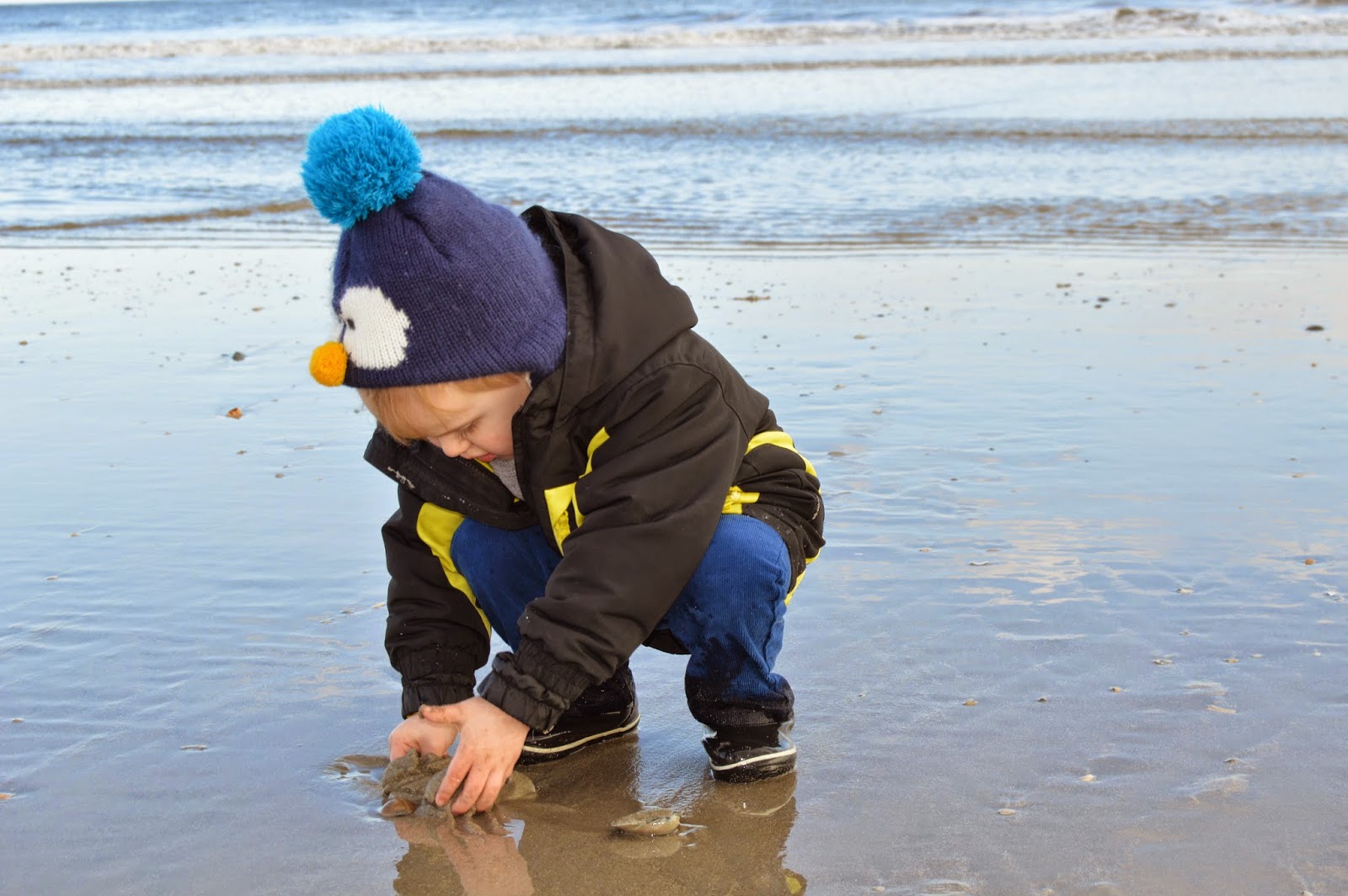 So many discoveries...shells, bits of crab, driftwood, and even a forgotten sand shovel from summer past.

He could have given us one type of treasure, one sweet moment, one type of shell, one color in the sky. He has given us an abundance. 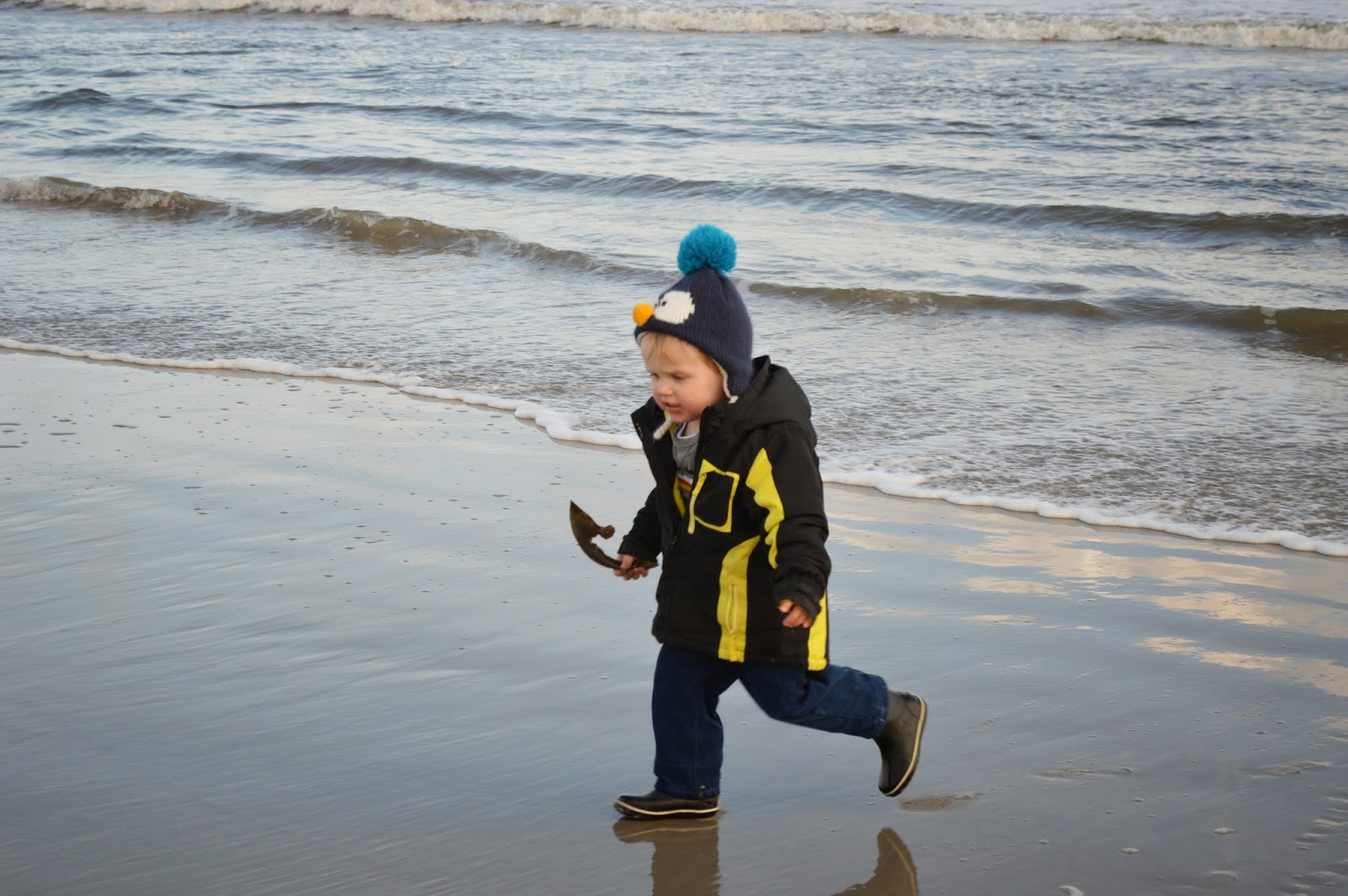 He got the hang of running from the waves.

Oh, and that crazy hat. It's from last year and too small for his head. But it is warm and snug.


Tonight, it is twelve degrees and the wind is blowing. It was the perfect night for soup and grilled cheese. This recipe would work just as well with butternut squash, but I used pumpkin. The garlic and thyme make it very flavorful. 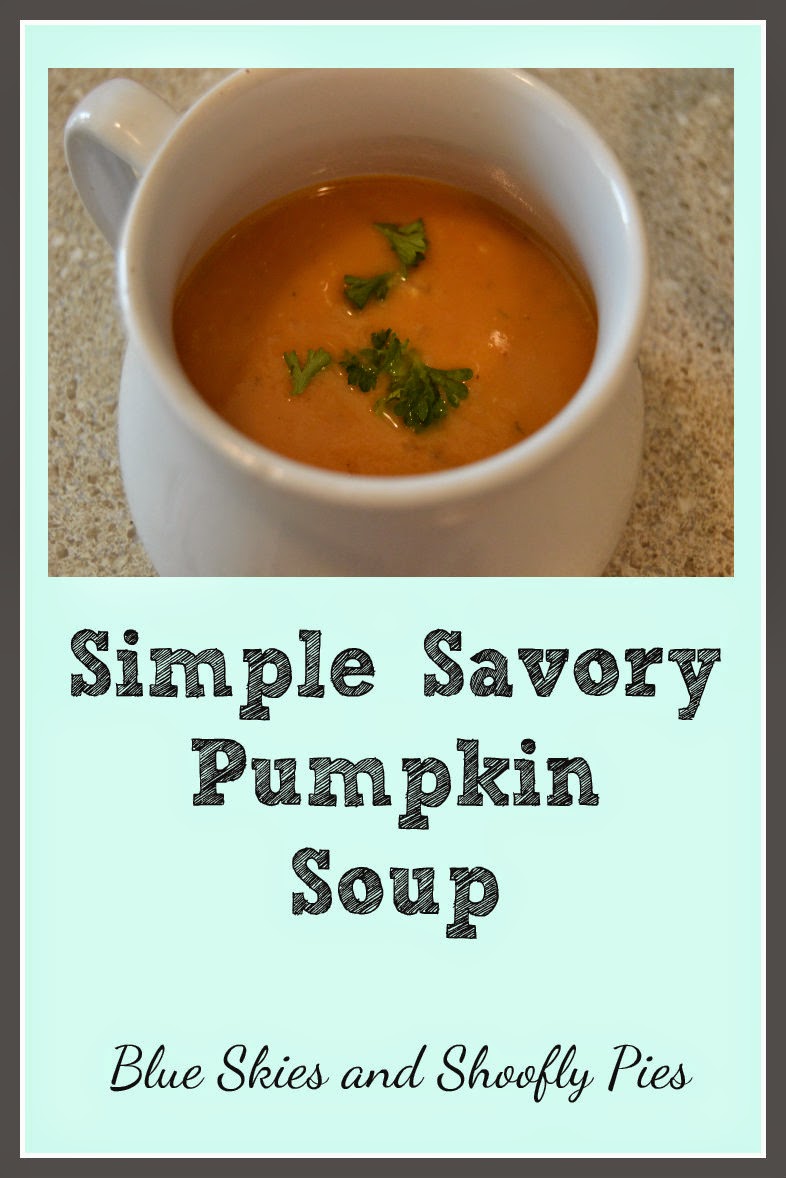 For the past couple years, I had been trying to take a photo of the deer crossing the road in front of our house at sunset. It was especially tricky as they time it perfectly to the sunset and not the clock, and the whole dance lasts less than a minute. Finally, one evening, I readied my camera and stood on the edge of our property. I waited for the deer to gather in the field and then make their crossing against the scenic backdrop.

The first deer spotted me and seemed reticent to do anything. That deer promptly told the others. Just as I moved in for the shot, they threw it in reverse and bolted into the woods wagging their white tails behind them. 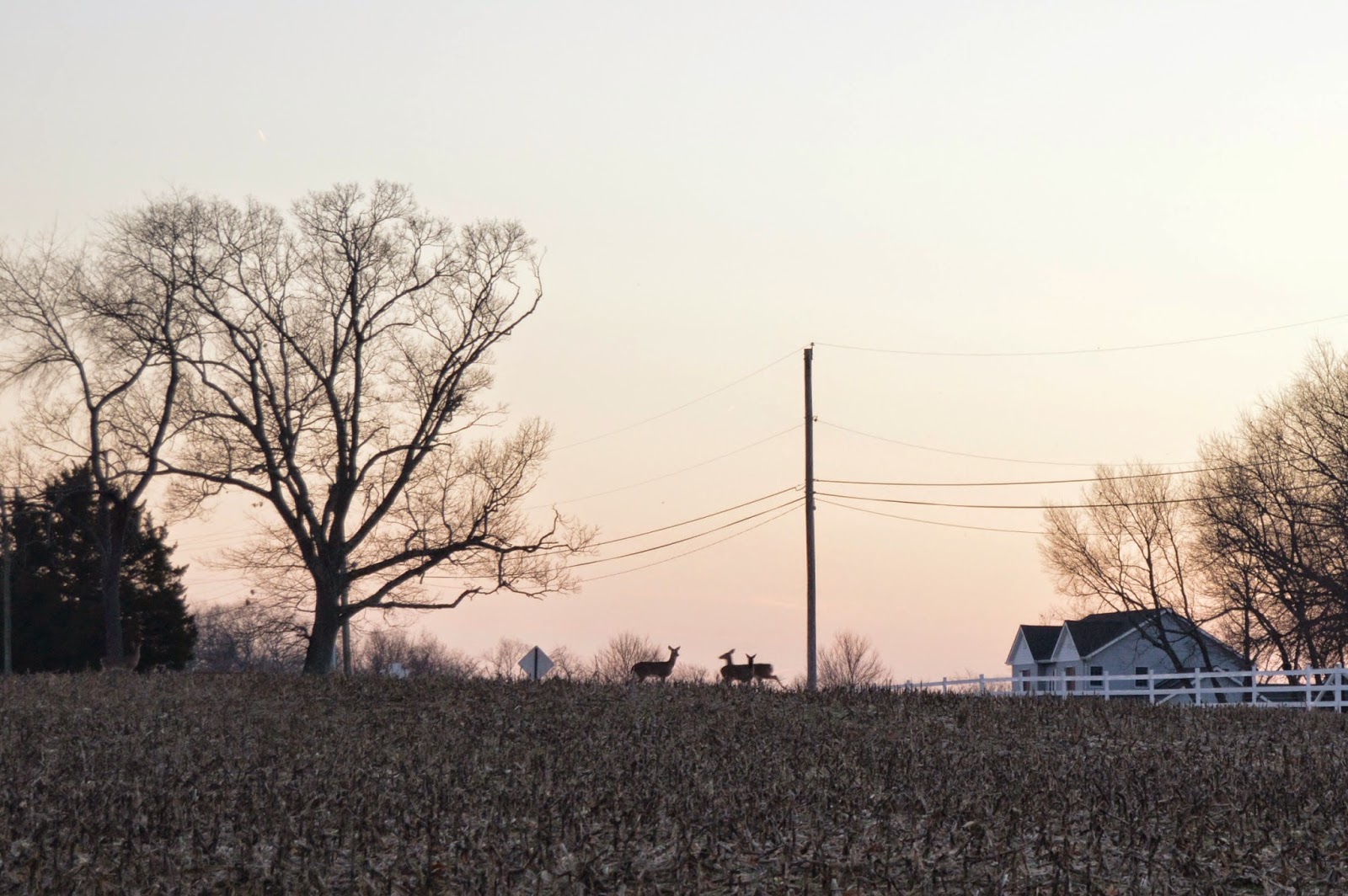 My fault for not attaching my best zoom lens.

Now, let me tell you the story of the picture I did get which was tainted with laughter, confusion, and a surprise ending.
Last summer I snapped this adorable picture of the Little Mister in the corn field behind our house. Taken with an old low megapixel point-and-shoot, I humbly submitted it to an annual photo contest in a popular state-wide farm newspaper. When the submission was initially printed, they made a horrible mistake on my last name. Here are some facts about my last name: 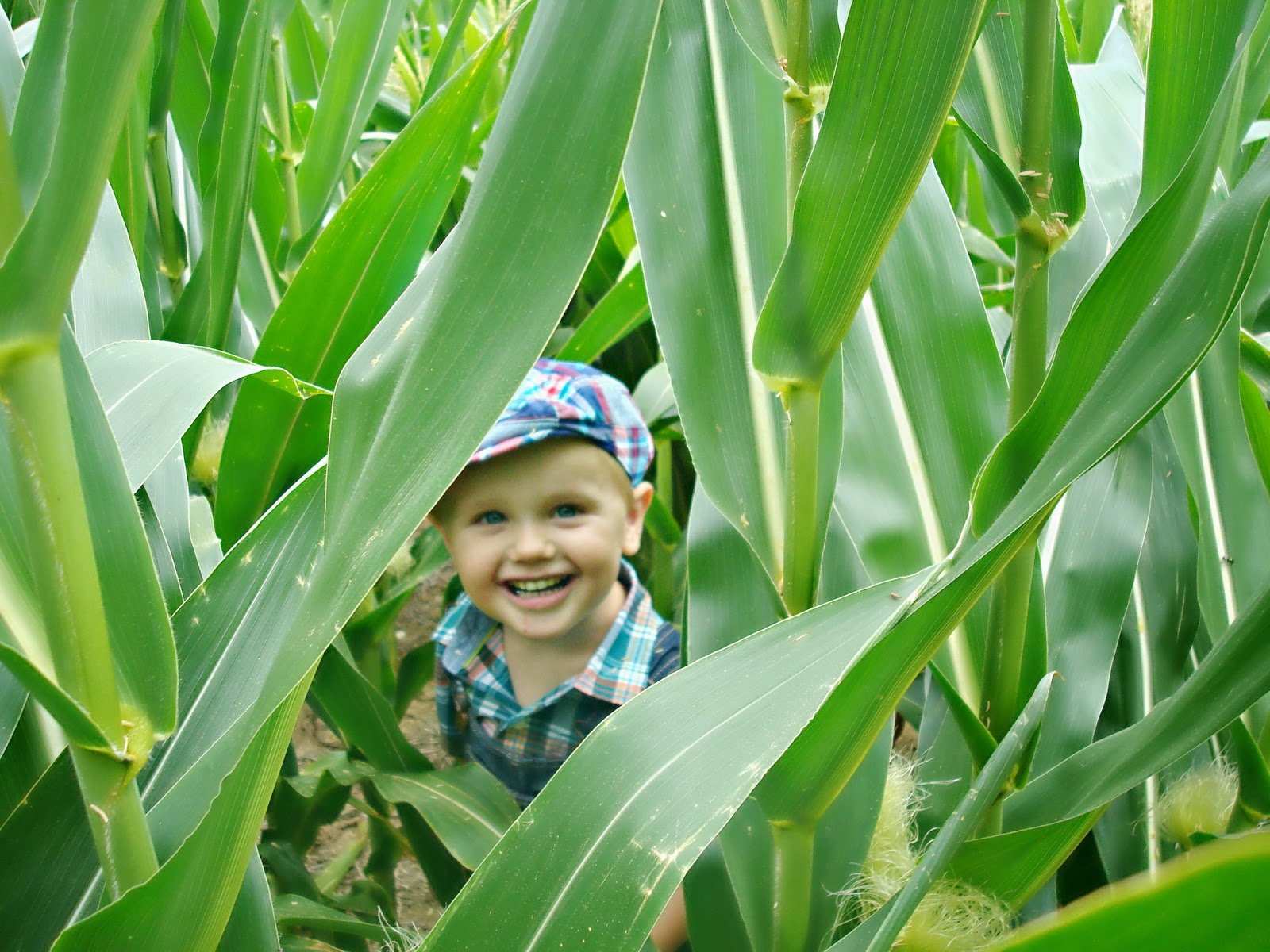 How could this go wrong?

Well, they could misspell it as I-S-L-A-M. Yes, my photo was credited as "Monica Islam".

I laughed about it for three days before sending a polite and well humored e-mail to the editor, who was extremely apologetic and very embarrassed. He assured me he had no idea how this happened, admitted it was a terrible mistake, and thanked me for my gracious e-mail. He also assured me there would be an attempt at a correction in the next issue. Only there wasn't, and none was ever printed. Ah, well.

I forgot about the contest for a while, and enjoyed the other entries as they were printed. Charming little girls in milking parlors and brothers posed in wooden wagons.

Then, the new year rekindled my memory.
"You know," I said to the Mister just last week, "The least they can do since they didn't print the name correction is select me as winner and award my son a cash prize." I was joking, of course.

Except that it did win. Within a week I was notified that my picture won the 2014 photo contest and a nominal monetary award for Little Mister's farm fund.

It was announced as winner in the paper and reprinted along with my correct three-letter last name.

Never could I imagine a story of delayed gratification quite like this, one that writes its own ending.
Posted by Monica at 7:23 PM 14 comments:

My Journey to a Clutter-Free Home I'm not a winter person, but I do like how clean the snow makes everything appear.

A few months ago, I did a big clean out of my belongings as one of my seasonal cleaning projects.

I've been living clutter free for three months now, and I love it.

It is everything you think it is, and also some things you probably wouldn't imagine. While the mind references popular images of clean counter tops and sparse rooms with decorative baskets holding two books and an umbrella, it is not that. It is livable without being sparse.

Here is what clutter free means at my house: Everything is in use, has a use, or is something we flat out love. If you love it, that alone makes it useful.

Clutter free does not mean that I never have to take three things out of a cabinet before I find the bottle of vitamins that dropped down behind some dishes. It does not mean there is never anything that needs to be sold, donated, or reassigned. It does not mean that we do not have to store anything. Indeed, there will always be Christmas decorations in the attic, wrapping paper tucked away for the next gift, and swimsuits and towels that await warmer days. I maintain one small laundry basket in a corner for items on their way out, usually the final stop before they are donated.

While I'm uncertain that there is a one-size fits all solution to getting stuff out of your living space, here is how it unfolded for me: 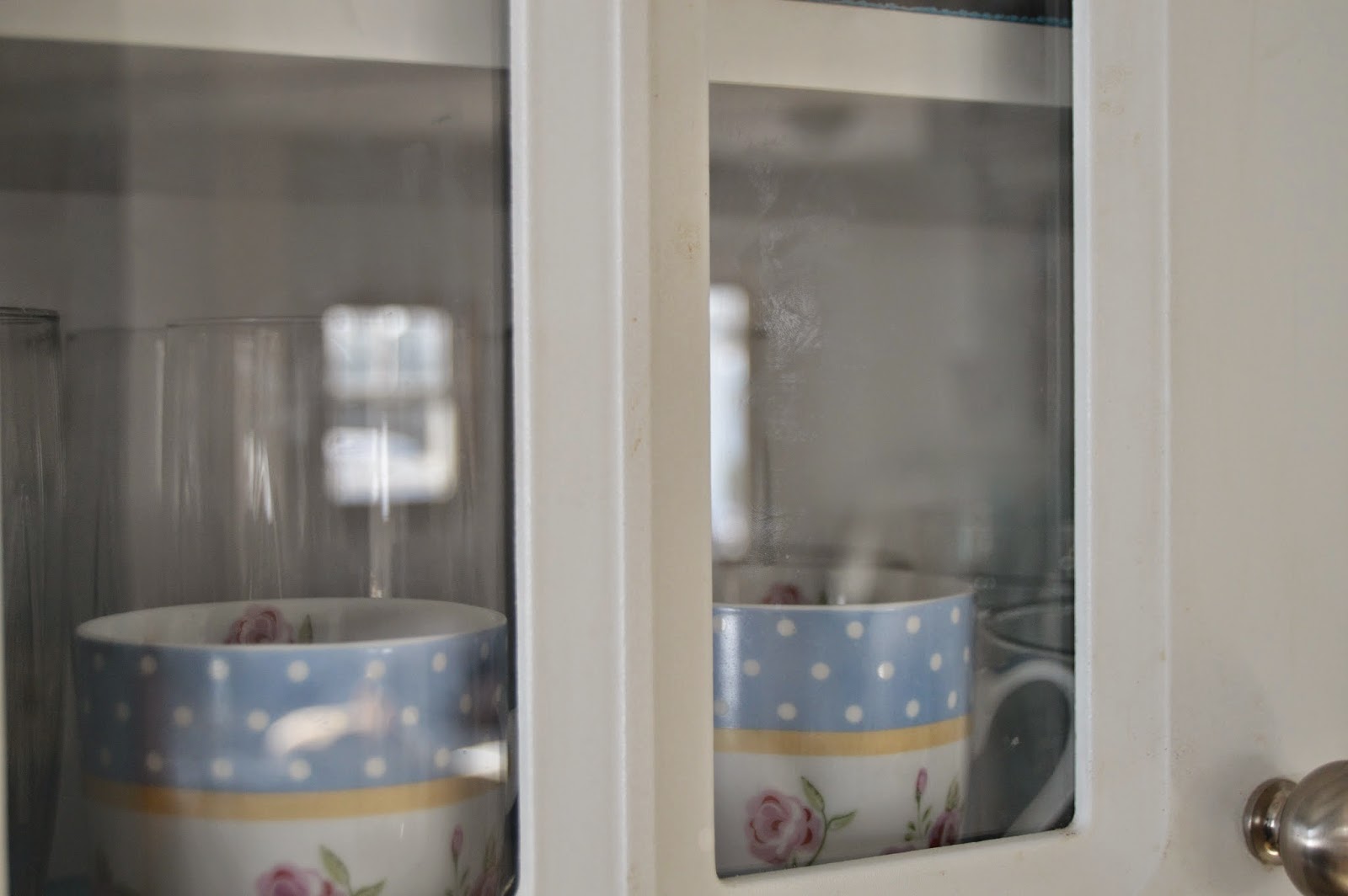 It took time. Three years worth of cooking magazines did not show up on my doorstep all at once. Also, persistence. Every time something was moved around I would analyze whether it was something we still needed or desperately wanted, especially with seasonal changes. A few posts back I mentioned our small house, and I think that is also a big help. If you don't get rid of the things that are no longer useful, you will have no room for new things to come into your home. Most of us have a finite amount of space to work with, and valuing the creation of empty space is as important as filling a space.

I adopted a one-in, one-out philosophy. If I was bringing home something, what was it replacing? More often than not, something that was broken or worn out.

It's a constant process. Although there is a time when you can savor and enjoy the things you own without the distraction of old stuff that has worn out its welcome, living without clutter require vigilance. After all, we're people who require tangible tools for living, and sometimes that is a family heirloom or less romantically, something made in China. There will be new stuff, old stuff, sentimental stuff, and stuff you can't stand.

The biggest challenge? Getting everyone on board with it. The Mister is a man who likes his stuff, but even he realizes you can't fit a castle in a cottage. The mail delivery assaults us with new paper every day, and if Old MacDonald read just a fifth of the farm journals that arrive each month, there wouldn't be much time for pigs and cows. Be gentle, persuasive, and a good example. If all else fails, buy nice baskets and put stuff in them, and then remind the owner of the contents that the basket needs periodic attention.

When clutter knocks on your door, it may wear a disguise. It could be a bag of hand-me-downs that are the wrong size and season, or something that seems like a bargain although you don't need it. Calmly explain that your treasures are being stored up in heaven. 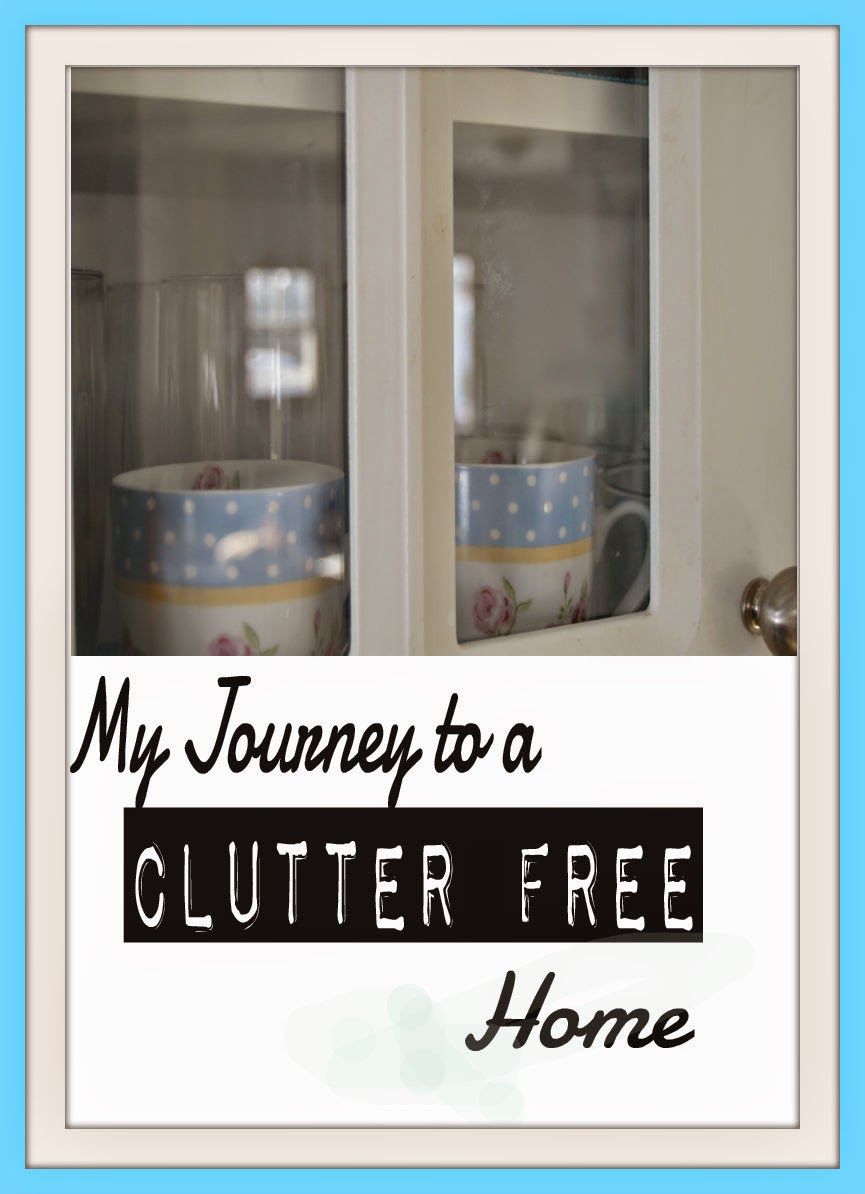