The Fly Away Home

Summer is hanging her weary head. 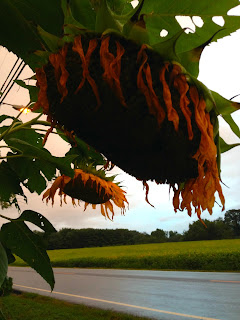 September has so far been a time of recovery. Can you believe that once, back when I was pregnant, I actually had a discussion with a friend on what I would do with all of my time once I stopped working outside the home? What was I thinking?

While I soaked in every ounce of a season rife with homemade root beer and bare feet, the to-do list grew fast as the days grow short. If I actually accomplished everything on it right now, my productivity would burn a whole straight through the core of the earth into China. In fact, if you count the things I did on the fly that never made it to a paper list, it might be the cause of some tectonic shifting.

This year is different. There is a now a soundtrack. A child learning to speak at the same time he is entering that why phase, where every sentence is a question, an endless song. A novelty song. It's rarely boring.

"Maybe you can buy more money at the money machine."

Sometimes it can be a little embarrassing. For instance, the declaration made aloud when a man stopped by with papers for us to sign and stayed a little too long.
"Is the stranger going to be here all day?"

Because Little Mister is not easily understood when he speaks, I'm still hoping that I was the only person in the room who comprehended that one.

There was also the pie bird. You know, that little ceramic bird you place in the middle of your double crust pie to let out steam? I'll tell you, few car salesmen have the persistence of a small child who discovers something as fascinating as the pie bird. What is this? What will it do? If you bake it in a pie, will it sing? Four and twenty blackbirds!
"Let's make a pie right now! Come on, I want to hear it sing!" 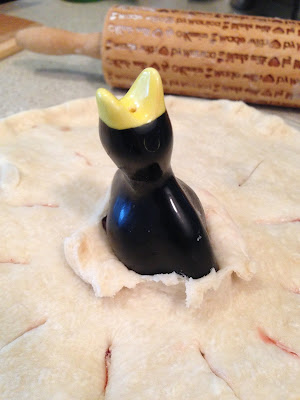 I had just made some ridiculous quantity of baked goods for a church sale, and someone had a growth spurt over the summer and needs all new clothes. A pie was no where on the radar.

After days of this I agreed to make a strawberry pie if Little Mister would help me make the crust. I wanted him to see that pies are not just something you throw together in under a minute. Like a quesadilla.

"Thank you for making me a strawberry pie."

Well, I guess that was worth something after all.

The squeak of newspaper as I clean the windows has nothing on what I hear these days. Fantastic stories involving ice fishing and a wild moose, super powers and pirates. The tall tales are punctuated at the end with "...and that is the end of my story."

I buzz about on busy bee wings, making the bed, cleaning the sink, wondering what that smell is and whether I left something in the oven. He swoops in gracefully, landing on the big step ladder next to the pantry. "Can I see the brownies to make sure there are no more brownies?"

There's back talk now, too.  Asserting himself, making himself heard.

Early one morning I see the certain "V" of birds in south-bound flight. They honk noisily, and back inside my own nest I absorb our own cacophony of sounds. It's quite a lot to get used to after years of a home where the only noise was the quiet hum of daily life. If I had to describe what it sounds like now I would tell you to extend your arms, flap and squawk about the letter you forgot to mail, laugh at the nude child eating garlic bread in the dryer, scream about something, and run around the house like pigeons in a park. It's the sound of wings as domestic and family life takes off in flight, never in the same direction.