Prize Winning Soup for the Soul

As the groundhog cast his wintry shadow and predicted extensive cold and gray, I remembered how wrong he was last year and went about my business of cleaning the pantry shelves.

Big buckets of flours and oat were pulled out and placed on the counter alongside quarts of fruit. I dutifully swept the crumbs out from the darkest corners and thought, my, this is the longest winter.

Sunlight shone for mere seconds and a strong wind howled as I replaced the items and began the next shelf, a hodge-podge of forgotten snacks, dip mixes, and surplus staples. I just wish the cold would be over with already. There is so much I want to do.

I wiped down the shelf and tried to clean a hardened stain that won't budge. February is a month of survival, so say the mice and the hearty kale plants still hanging on in the garden. I move on to my next shelf which appears to be a treasure trove of forgotten purchases, ingredients purchased with the best intentions for some recipe that excited me once. Then I hear the sound that always cheers me. The gentle but distinct putt putt putt puff chuff chuff chuff... 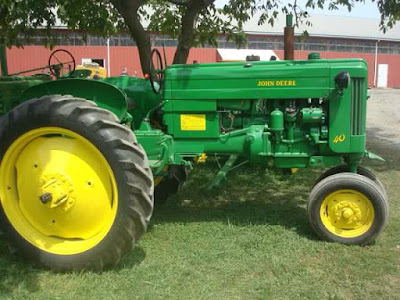 I love that sound. It's still gray, but the sun is shining for just a minute. For just a minute it is August and I walk amongst the machines at an antique engine pull, balancing my root beer and a tired little boy. It's getting louder. PUTT PUTT PUTT. Then I see the flash of bright green and yellow paint. Green and yellow, the colors of sun and ripening fields. My neighbor is driving his old tractor down the road between home and work. He doesn't have to ride his restored antique. He could actually drive, or bicycle. Sometimes he does. And then sometimes, he might need a little August in the winter, too. Like a beach umbrella in the snow, his happy tractor provides a bit of hope and whimsy as I close the door on my clean pantry.

February has its moments. If you follow me on Instagram you can see a photo collage of a small baked doughnut project that Little Mister and I did together. 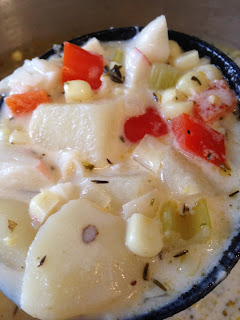 Also, for the second year in a row, I won our church's friendly and not terribly competitive soup contest. The grand prize is the good feeling of knowing that a lot of people really enjoyed something you made that was exceptional. This year I entered a Corn and Crab Chowder that I hadn't made in many years, if only because crab is not exactly in the budget anymore. Then I discovered I could use a much more economical substitution of imitation crab without compromising the taste one bit.

I won with minimal lobbying on my part. Except for the time I spent at the soup table loudly declaring I THINK THE HOMEGROWN ORGANIC CORN FROM OUR OWN GARDEN REALLY MAKES IT.

I was a little hoarse the next day. 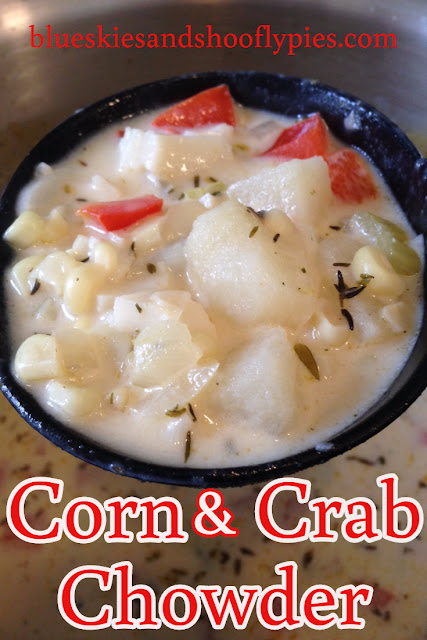 Yield: About 16 cups. It's great for company!

Whisk in vegetable stock. Add corn and whisk. Add peppers, potato, and thyme. Season with salt and pepper and increase heat to MED-HIGH. Cook, stirring occasionally, about 10 minutes until it comes to a boil.